Gov. Brian Kemp delivers his victory speech after winning the 2022 race for Georgia governor, securing another term in office. He lays out future plans for Georgia's economy.

Kemp, who was a developer before serving as a state senator and secretary of state, managed to clinch another term despite attacks from former President Donald Trump that threatened to snuff out support in his own party.

"It looks like the reports of my political death have been greatly exaggerated," Kemp told his supporters Tuesday night from his election headquarters at the Coca-Cola Roxy in Cobb County. ""Each day of this race, we talked about how Marty and the girls and I think we live in the best state in this country--to live, work and raise our families. And we all know that my opponent disagreed. But looking at the results tonight, we made sure that Stacey Abrams is not going to be our governor or your next president."

Abrams, a lawyer whose 2018 loss to Kemp helped launch her into Democratic stardom, called Kemp Tuesday night to concede the race.

"I am doing the responsible thing, I am suspending my campaign for governor," Abrams told her supporters Tuesday night. "While I may have not crossed the finish line, that doesn't mean that I won't stop running for a better Georgia."

Democratic challenger Stacey Abrams thanks her supporters after calling to concede the race for Georgia Governor to incumbent Brian Kemp.

Kemp, 59, seemed on shaky ground among Republicans after the 2020 presidential election, when Trump blamed him for not doing enough to overturn President Joe Biden’s narrow win in Georgia. Trump helped lure former U.S. Sen. David Perdue into a primary challenge to Kemp, whom he called a "complete and total failure".

"I can't tell you how honored I am to be your governor for the next four years. You have honored us beyond measure with your vote, with your support, with your time and with your resources. Most importantly though, you have honored us with your prayers and our whole family is grateful for that," Kemp said Tuesday night. "As you all know, there were a lot of people in high places who thought tonight's victory would never happen. But like so many times before, you all and Team Kemp proved them wrong."

Here are results for the governor's race in Georgia. Click here to return to the master results list.

But Kemp motored away from Perdue during the GOP primary, winning nearly 74% of the vote. Kemp patiently explained his election actions to Republicans even as he used his office to sign conservative-pleasing bills loosening gun laws, cutting taxes and banning "divisive concepts" in schools.

While many incumbents were weakened by serious primary challenges, Kemp appeared to be strengthened. Trump’s attacks gave Kemp credibility with the narrow margin of Georgia voters who are willing to consider voting for either party, a largely white, college educated and suburban demographic.

Kemp highlighted his stewardship of the state economy and his decision to relax public restrictions early in the COVID-19 pandemic.

He also gave billions in tax breaks and handouts using federal and state money. Kemp pushed laws to suspend the state gas tax, give $1 billion of state income tax refunds and even give $350 to every person in the state on public assistance. He also pledged another income tax break and a property tax break if reelected, portraying the cash as helping Georgians "fight through 40-year-high inflation and high gas prices" that he blamed on Biden, Abrams and other Democrats. 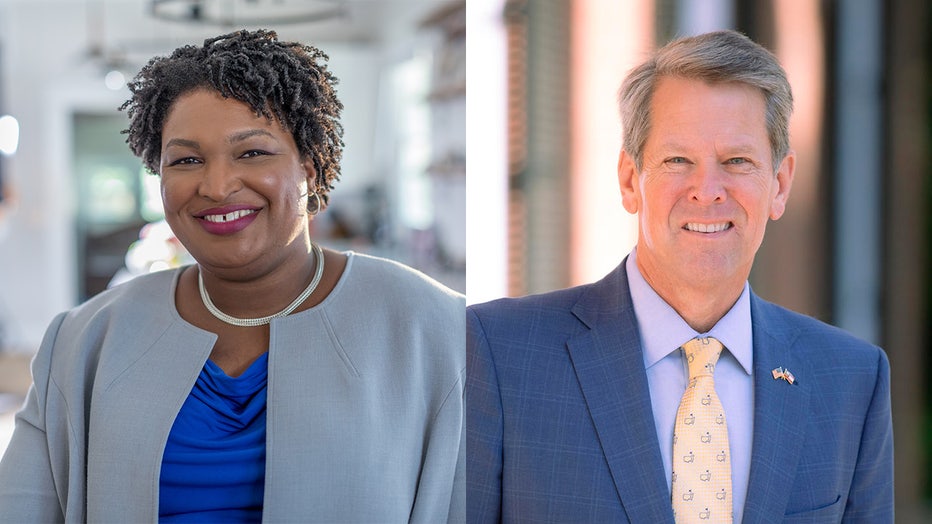 Wages & Economy on top of Georgians' minds heading to polls

Nearly half of Georgia voters said the economy is the most pressing issue facing the country, according to AP VoteCast, an expansive survey of more than 3,000 voters in the state.  Roughly a third of Georgians say their family is falling behind financially. A majority of those voters cast ballots for Kemp and Republican U.S. Senate candidate Herschel Walker. The slight proportion of voters — about 1 in 10 — who say their families are getting ahead financially were more likely to vote for Democratic candidates, including Abrams and U.S. Sen. Raphael Warnock.

Rising costs were named as a top concern among the state’s voters, with roughly 9 in 10 saying the inflated prices of groceries, gas and other goods were an important factor in how they cast ballots. Among those who said they considered inflation in their voting decision, roughly half said the cost of groceries and food was the most important factor.
Abrams spent the four years since her defeat laying the groundwork for another run. She formed a forceful voting rights advocacy group — Fair Fight Action — and built her own personal wealth as Democrats gobbled up her books and paid to attend her speeches.

Her national profile was so high that she was considered as a possible running mate for Biden or even a candidate for president herself. That helped Abrams outraise Kemp with the help of a state law that allows candidates for governor to accept unlimited contributions through an associated committee.

Abrams raised $85 million through Sept. 30, but even Kemp’s $60 million would have by far been a record for a governor’s race in Georgia, as he sought to build a national fundraising base. And Abrams’ financial advantage was never enough to run away with the race — Kemp has led in polls throughout.

Abrams in contrast to Kemp

Abrams, 48, rolled out a campaign that she once described as "rife with plans," including a big pay raise for teachers, legalizing casino and sports gambling to pay for more college aid, expanding Medicaid health insurance, aiding small and minority-owned businesses, and making housing more affordable. At the same time, Abrams pledged to tighten Georgia’s gun laws and roll back abortion restrictions, arguing Kemp was far from moderate.

Roughly 7 in 10 voters also identified the U.S. Supreme Court’s decision to overturn the constitutional right to an abortion as an important factor in their vote. About a quarter of voters described it as the single most important factor; these voters were more likely to cast a ballot for Warnock and Abrams.

Kemp launched frequent attacks on Abrams, accusing her of not supporting police. A sizable majority of voters identified crime as a factor in their how they cast ballots, AP VoteCast found. More than 8 in 10 voters described it as an important issue. And roughly 8 in 10 Georgians say they’re concerned about crime in their own communities