A motorcycle mechanic in his 20s from north King County won the $1M grand prize in Washington state's vaccine lottery.

A motorcycle mechanic in his early 20s, only identified as Kameron M., was presented a $1 million oversized check for getting at least one shot of a COVID-19 vaccine before June 30.

Kameron, of north King County, said he didn't know about the incentive until he got a call from his mom, who the state tracked down when they were unable to reach Kameron – his phone is set up to screen unknown numbers and potential scams, he said at a press conference Friday. 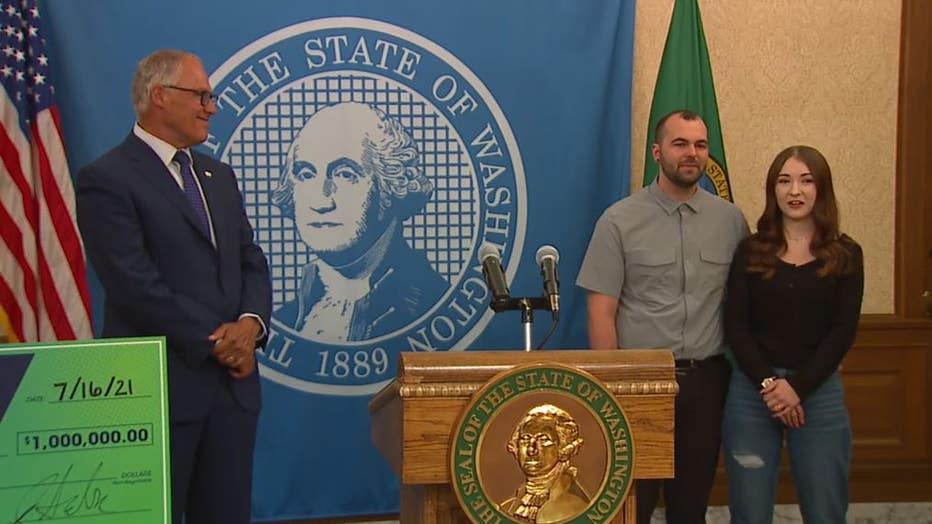 Kameron added that he chose to get the vaccine because he wanted to keep his family and peers safe.

"I don't want to tell people what they have to do," Kameron said. "I just want them to do what they feel is right."

He said his next move is to find a financial advisor and that he won't be quitting his job.

Previous drawings with $250,000 prizes took place throughout June, as did other winnings, including Guaranteed Education Tuition credits for vaccinated individuals ages 12 to 17. The incentive, which applied to those who got their first shot last month as well as residents already vaccinated, was announced June 3.

"I hope that people feel good about the fact that they are giving a great gift to people in their family and where they work and go to school," said Inlsee of those who have been vaccinated. "It's better than $1 million."

Winners of the previous drawings include a Spokane nursing student, Walla Walla food-service worker and Yakima resident. Guaranteed Education Tuition credits for vaccinated individuals ages 12 to 17 were also awarded, as were airline tickets, video-game consoles and other prizes.

The announcement comes days after the state Department of Health announced Wednesday that 70% of Washington residents 16 and older had at least one shot of a vaccine.

According to a state DOH analysis, the lottery incentive increased vaccination rates by 24% across all ages. Inslee shared these data on Twitter and noted that accounts for nearly 30,000 additional jabs.

This is the last drawing of the Washington vaccine lottery. Aside from the cash prize, the lottery winner will receive additional prizes including an X-box and Seahawks tickets. 69.8% of those 16 and older in Washington have received one dose of the vaccine while 61.9% are fully vaccinated.