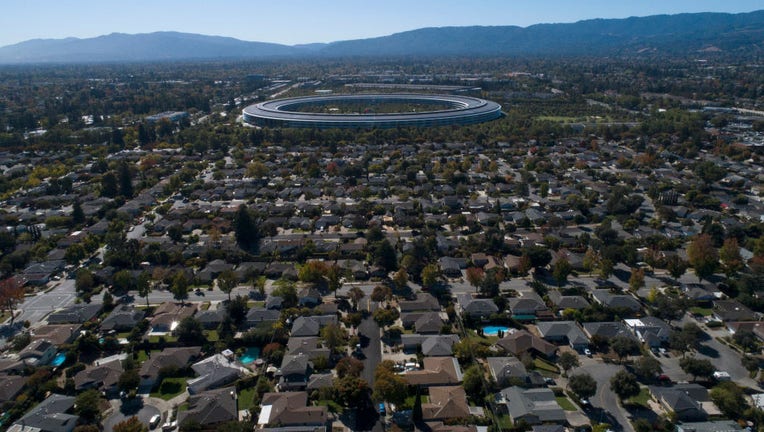 Where are the "happiest" places in America? Many of them are in California, and the top 10 all have high marriage rates, according to a recently-published study.

The research, conducted by the financial tech company SmartAsset, analyzed available government data from more than 160 of the country’s largest cities. It ranked the "happiness" level based on various metrics under three categories: personal finances, well-being, and quality of life.

RELATED: Here's how much money you need to make to be happy living in the US, according to study

The study found that six California cities landed in the top 10, with the northern city of Sunnyvale ranking as the city where Americans are happiest. The company said the California cities on its list ranked higher for having lower percentages of people living in poverty, higher marriage rates, and lower violent crime rates.

High marriage rates were a common theme for America’s happiest cities, according to the results. In all but one city in the top 10, Arlington, Virginia, married residents made up the majority of the population. Frisco, Texas, which ranked No. 5 overall, had the highest marriage rate in the study at 62.6%.

On the other end of the happiness spectrum, Birmingham, Alabama, ranked in the bottom five on SmartAsset’s list — based on metrics like personal bankruptcy filings per capita, life expectancy, and the percentage of residents living in poverty.

How the study ranked where Americans are ‘happiest’

To find where Americans are happiest, SmartAsset said it analyzed the 200 largest cities of which 164 had available federal and local government data. It focused on 13 metrics across three categories:

Top 10 places where Americans are happiest, according to SmartAsset’s study

1. Sunnyvale, California: Sunnyvale, one of the major cities that make up California’s Silicon Valley, had the highest percentage of individuals earning $100,000 or more (62.5%), according to the study. It also had the third-lowest percentage of adults living below the poverty level (roughly 5%) and the fifth-highest marriage rate (56.8%). Violent crime in the area was also low (No. 9) with roughly 149 violent crimes per 100,000 residents.

2. Arlington, Virginia: Roughly 48% of Arlington’s residents were found to earn $100,000 or more (No. 5), according to the findings. This, while living costs made up less than 35% of the median household income. The county in which Arlington is located also was found to have the lowest amount of personal bankruptcy filings, the study said.

3. Bellevue, Washington: Bellevue scored highest in the quality of life category but also did well for resident personal finances. Specifically, about 61% of Bellevue's residents earned $100,000 or more (No. 2) and less than 8% of the population was found to live below the poverty line, the study found. Additionally, the cost of living as a percent of income was the lowest across the study at 28.69%.

4. Fremont, California: Fremont ranked third in the study for both its high percentage of individuals earning $100,000 or more (55.4%) and its low living costs relative to income (32.17%), according to the findings. The city also ranked second for both the percentage of adults who were found to live below the poverty level and its marriage rate.

5. Frisco, Texas: Frisco, Texas took both the No. 1 spot for the marriage rate (62.6%) and the percentage of residents living below the poverty level (2.5%). The city also ranked second in the study for its typical living costs compared to the median household income (29.55%), and its violent crime rate (roughly 86 crimes per 100,000 residents), according to the findings.

6. Plano, Texas: Plano ranked in the top 20 across six metrics, including the fourth-highest marriage rate (56.9%) and the 10th-lowest violent crime rate (roughly 155 for every 100,000 residents), the study found. Just over a third of the Plano population was found to earn $100,000 or more and the typical cost of living expenses made up 40.43% of the median household income in the city.

7. Roseville, California: Living costs in Roseville, located about 20 miles outside of Sacramento, were found to be the fifth-lowest across the study and made up about a third of the median household income annually. Just over 38% of the city’s population were found to earn $100,000 or more (13th-highest), and less than 6% were found to live below the poverty level (fourth-lowest), according to the findings. Placer County, in which Roseville is located, also had the 15th-lowest number of personal bankruptcy filings in the study.

8. San Jose, California: Roughly 43% of San Jose residents were found to earn $100,000 or more (10th-highest), and less than 7.4% were found to be living in poverty (eighth-lowest). Furthermore, Santa Clara County — where San Jose is located — took the No. 2 spot for both the percentage of residents reporting poor mental health days (10%) and life expectancy (84.7 years).

9. Santa Clarita, California: The city ranked best in the quality of life category, taking the No. 8 spot, according to the findings. Specifically, less than 7% of the city’s population was found to live in poverty (sixth-lowest) and roughly 53% of residents are married (10th-highest). The area also had the seventh-lowest violent crime rate study-wide (roughly 131 crimes per 100,000 residents).

10. Irvine, California: This Southern California city ranked in the top 10 for both the percentage of individuals earning $100,000 or more (nearly 46%) and living costs as a percent of income (roughly 38%), according to the findings. Irvine also had the No. 1 lowest violent crime rate in the study (51 crimes for every 100,000 residents). Furthermore, Orange County, in which Irvine is located, also ranked No. 10 for both the percentage of residents reporting poor mental health days (11.3) and life expectancy (82.8 years), the study found.

Plan ahead for retirement: Planning for financial happiness in the future should begin now, SmartAsset said. Learn about different retirement accounts that exist and use a retirement calculator to visualize progress over the years ahead.