BENTONVILLE, Ark. - Walmart said this week it invested in drone delivery company DroneUp and is eyeing a future in nationwide drone deliveries after launching a pilot program last year.

The world’s largest retailer, based in Bentonville, Arkansas, has used the drone company since last year as part of a pilot program to deliver at-home COVID-19 test kits to customers’ doorsteps.

"The trial demonstrated we could offer customers delivery in minutes versus hours. Now, after safely completing hundreds of drone deliveries from Walmart stores, we’re making an investment in DroneUp to continue our work toward developing a scalable last-mile delivery solution," Walmart U.S. CEO and President John Furner said in a statement.

Furner noted Walmart’s significant infrastructure already in place, which includes 4,700 stores stocked with more than 100,000 items. The company also has a store located within 10 miles of 90% of the U.S. population, he said.

"This makes us uniquely positioned to execute drone deliveries, which is why our investment in DroneUp won’t just apply to the skies but also the ground," he said.

The CEO said Walmart will begin operating with DroneUp at a store near its headquarters "in the coming months." 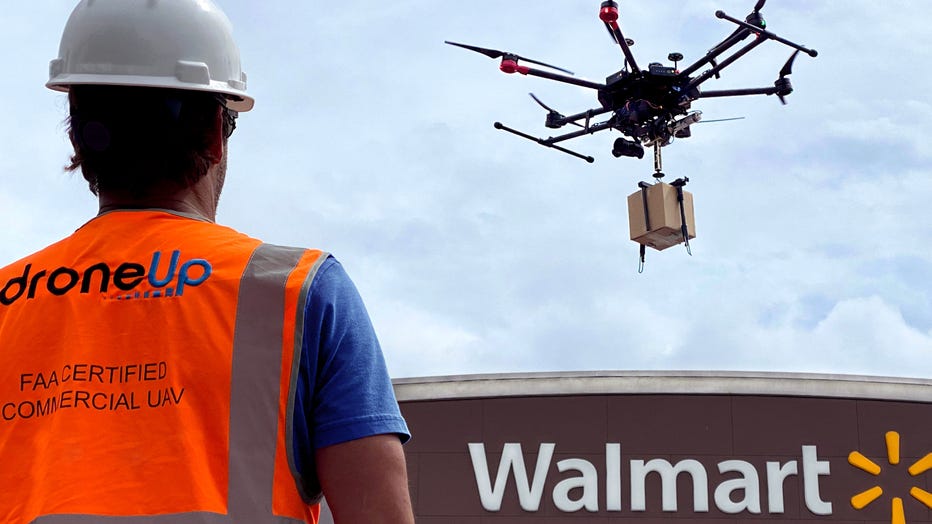 An individual is pictured piloting a DroneUp drone delivery near a Walmart store in a provided image. (Photo credit: Walmart)

DroneUp operates commercially throughout the U.S. It was the first operator to use the FAA 107.39 waiver, an operation that allows for delivery flights to be conducted over people and moving vehicles, Walmart said in the statement.

Last year, Walmart also began a drone trial with Zipline to deliver health and wellness products in Northwest Arkansas, as well as a pilot program with Flytrex to deliver select grocery and household essential items in Fayetteville, North Carolina.

Other major retailers have announced similar programs in an effort to further expand their e-commerce operations.

Kroger, the largest grocery chain in the U.S., announced a pilot program in May testing drone deliveries of online grocery orders in Ohio and at a Ralphs store in California. The company said the technology allows the delivery to occur at the location of the customer’s smartphone, rather than a specific address, meaning the individual could order picnic supplies to a park or sunscreen to the beach.

"Kroger's new drone delivery pilot is part of the evolution of our rapidly growing and innovative e-commerce business – which includes pickup, delivery, and ship and reached more than $10 billion in sales in 2020," Kroger's Jody Kalmbach, group vice president of product experience, said in a statement.