A memorial was held in rainy Pomona just a day after a car rammed into a taco stand, killing one person and injuring a dozen others.

POMONA, Calif. - At least one person is dead after a car smashed into a taco stand in Pomona Friday night.

The Los Angeles County Fire Department responded to a call of a crash in the 1600 block of West Holt Avenue around 7:45 p.m.

According to the LA County Fire Department, one person died at the scene, and 12 others were hurt in the crash. Three of the twelve people were listed in critical condition. The person killed has been identified as 52-year-old Gilberto Cazares Payan.

Family and friends gathered at the crash site Saturday to pay their respects to Payan and his family. Payan was described as a loving father of four. 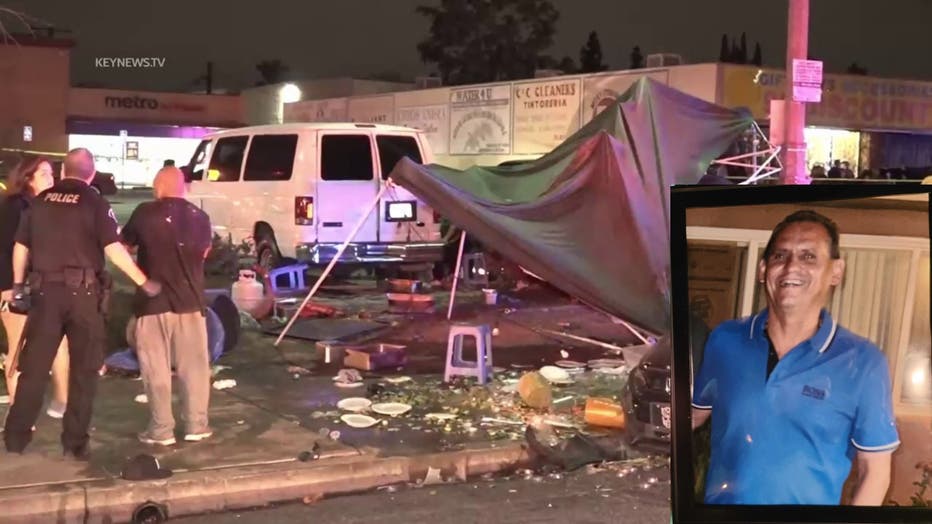 Javier Romero witnessed the crash. He was planning to buy food from the taco stand before changing his mind.

"I told my kids 'let's go get something to eat' and then I said no. I changed my mind because I don't have that much money, so I decided to go to Cardenas [grocery store in the same plaza] to buy food," said Romero.

Romero said as he was walking away with his two children, ages 5 and 6, the crash happened.

"I'm like 100 feet away when I hear all the noise. There was screaming like crazy. I saw a dead body, and there was nothing left. Everything was flying," said Romero.

It haunts Romero to think about what could have happened if they stayed in the line.

"I keep thinking me and my kids were going to be dead too because we are already there and we were walking away. It's bad. These people [working at the taco stand] come to work and make a living for their families. A lot of people come from other countries to have a better life and this is what happened," said Romero.

According to Pomona police, the 26-year-old female driver, was traveling eastbound on Holt Ave. when she veered into westbound lanes and crashed into the taco stand.

She fled the scene, but about an hour later she returned and turned herself in.

The driver was arrested and booked at the Pomona City Jail for vehicular manslaughter with gross negligence and hit-and-run death/Injury. It is unknown if alcohol or drugs played a factor in the crash.