MEXICO CITY - Mexico announced Monday that several top U.S. advisers on border and immigration issues will meet with Mexican officials on Tuesday to discuss migration and development in Central America.

The talks come as a surge of migrants has hit the U.S. southern border. The trip to Mexico will include Roberta Jacobson, the White House’s lead adviser on the border, and Juan González, the National Security Council’s senior director for the Western Hemisphere.

The White House said Jacobson, a former U.S. Ambassador to Mexico, will go there Monday "to engage with Mexican government officials to develop an effective and humane plan of action to manage migration."

Roberto Velasco, Mexico’s director for North American affairs, said the talks will focus on the two countries' "joint efforts for secure, safe and regulated migration," and plans to provide economic development in southern Mexico and Central America so people won't come under pressure to migrate.

The White House said Gonzalez will then go on to Guatemala, to "meet with Guatemalan government officials, as well as representatives from civil society and non-government organizations to address root causes of migration in the region and build a more hopeful future in the region."

Also among the U.S. officials is Ricardo Zúñiga, who was named Monday as Special Envoy for the Northern Triangle, which includes El Salvador, Guatemala, and Honduras — three of the countries sending the most migrants to the United States.

The State Department said Zuñiga will "coordinate closely with the National Security Council staff on the administration’s comprehensive efforts to stem irregular migration to the United States and implement President Biden’s multi-year, $4 billion to address root causes of migration in Central America."

Since Biden’s inauguration, the U.S. has seen a dramatic spike in the number of people encountered by border officials. There were 18,945 family members and 9,297 unaccompanied children encountered in February — an increase of 168% and 63%, respectively, from the month before, according to the Pew Research Center. 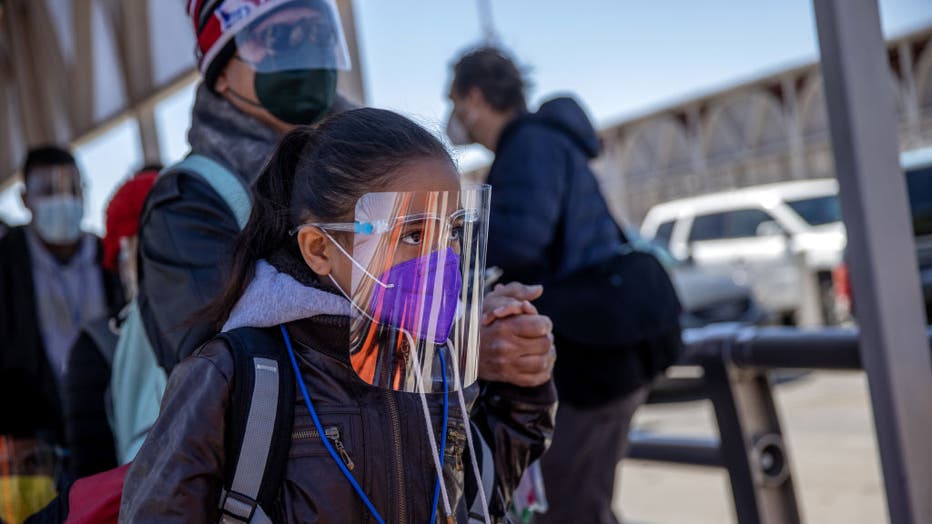 Asylum seekers cross an international bridge from Mexico into the U.S. on March 17, 2021 in Ciudad Juarez, Mexico. (Photo by John Moore/Getty Images)

U.S. border patrol officials had encountered more than 29,000 unaccompanied minors since Oct. 1, nearly the same number of youths taken into custody for all of the previous budget year, according to administration officials.

Mexico announced restrictions last week on nonessential travel across its southern border with Guatemala and Belize "to prevent the spread of COVID-19," and sent hundreds of immigration agents and National Guard to the southern border to clamp down on crossings.

Mexico did not explain why the measure was announced now, more than a year after the start of the pandemic, but it came on the same day the U.S. confirmed it will send 2.5 million doses of the AstraZeneca coronavirus vaccine to Mexico.

Officials say migrant traffickers are encouraging people to make the trip by claiming the U.S. border is open to migrants, while Biden administration officials have stressed that the border is not open.

Mexico has cooperated with U.S. efforts to stem the flow, while stressing that the problem can only be solved by addressing the root problems of poverty and joblessness that lead many to migrate. Mexico has proposed massive investment to promote economic development in those areas.