New research out of the United Kingdom seems to suggest that wine is the only alcoholic drink that can be beneficial for health — and it may only be due to the powerful antioxidants found in grapes.

Some studies have suggested that low-to-moderate amounts of alcohol can actually decrease the risk of mortality and cardiovascular disease. But the team behind the new research says such studies have been "riddled with errors."

A team at Anglia Ruskin University in Cambridge, England, aimed to look at different alcoholic drinks, like beer, cider, champagne, white and red wine and spirits, and various health outcomes among those who consumed.

The team, lead by Dr. Rudolph Schutte, analyzed data of more than 500,000 people in the U.K. over a seven-year period.

They found that low-level consumption of beer, cider and spirits was associated with an increased risk of cardiovascular events, coronary heart disease, stroke, cancer, and overall mortality.

The only health benefit that Schutte’s team discovered was a decreased risk of coronary heart disease through the consumption of wine. But Schutte believes the benefits obtained from wine and champagne are actually thanks to polyphenols, which are antioxidants found naturally in the grapes, and not necessarily through the alcohol itself.

A similar finding was also observed in alcohol-free wine, the researchers said.

"This relationship is also seen for alcohol-free wine, so it suggests the benefits are thanks to the polyphenols in the wine rather than the alcohol. Researchers commonly use coronary heart disease as a standard measure for health and this is one of the reasons we see so many studies claiming the health benefits of ‘alcohol,’" he continued. 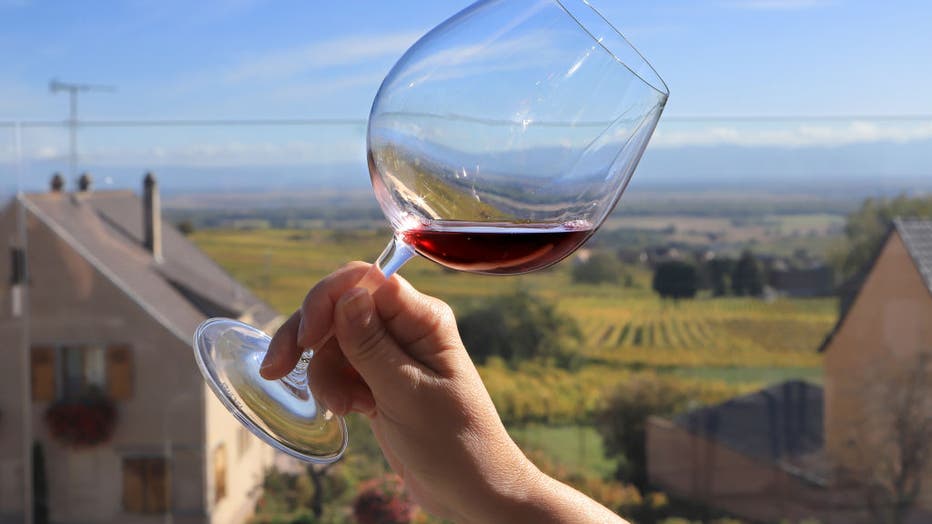 FILE - A person enjoys a glass of Pinot Noir wine on Oct. 11, 2019, in the village of Voegtlinshoffen in the Alsace region of eastern France. (Photo by David Silverman/Getty Images)

The study was published in the journal "Clinical Nutrition" and the findings were also presented on Sept. 8 at the British Science Festival in Chelmsford, England.

Previous studies into alcohol and health "have identified a J-shaped curve, indicating that low levels of alcohol consumption can be beneficial," the research team said. But Schutte’s team believes these studies are incorrectly making comparisons with non-drinkers — who may be choosing to avoid alcohol because they already have health issues.

"Our findings do not support the notion that alcohol from any drink type is beneficial to health," the study concludes. "Consuming low levels of beer/cider and spirits already associated with an increased risk for all health outcomes, while wine showed opposite protective relationships only with ischemic heart disease."

The research comes amid warnings from health officials about increased alcohol consumption during the COVID-19 pandemic.

The Dietary Guidelines for Americans recommend that adults who choose to drink do so in moderation, determined to be one drink or less on a day for women or two drinks or less for men.

However, there is strong scientific evidence that even drinking within these recommended limits may increase the overall risk of certain cancers and some forms of cardiovascular disease, according to the U.S. Centers for Disease Control and Prevention.