LOS ANGELES - “This is one of the most important days for remembrance." Words from Marc Manfro. A Castaic resident who used to be a New York cop. He was a transit police officer and later NYPD.

Manfro is the son of a cop and father of another who works for LAPD. He was pulled into duty back on September 11th of 2001 when the twin towers were attacked.

Before racing to work, he remembers seeing the towers fall on TV.

“It’s incredible to see ten blocks having disappeared like if a nuclear bomb had struck and all the people in those ten blocks disappeared… it’s worse than a Twilight Zone episode,” says the 59-year-old.

But, in his real-life Twilight Zone, Manfro says exposure to toxic dust seriously affected his heart and overall health. He elaborates saying, “I have headaches … cough… and... shortness of breath." He had two heart surgeries. There's been depression and nightmares. Manfro says, “The nightmare of 9/11 is when you wake up every morning and you realize that that’s for real. Those people really did get killed. And the thousands and thousands of friends and relatives, like me, that have to be depressed the rest of their lives.”

Manfro, who was honored with dozens of accolades and commendations during his 18 years as an officer, says looking back is tough. “Even though I guess I was sort of a warrior you’re fighting muggers every day in the subway but you don’t expect you're going to have to fight terrorists.” 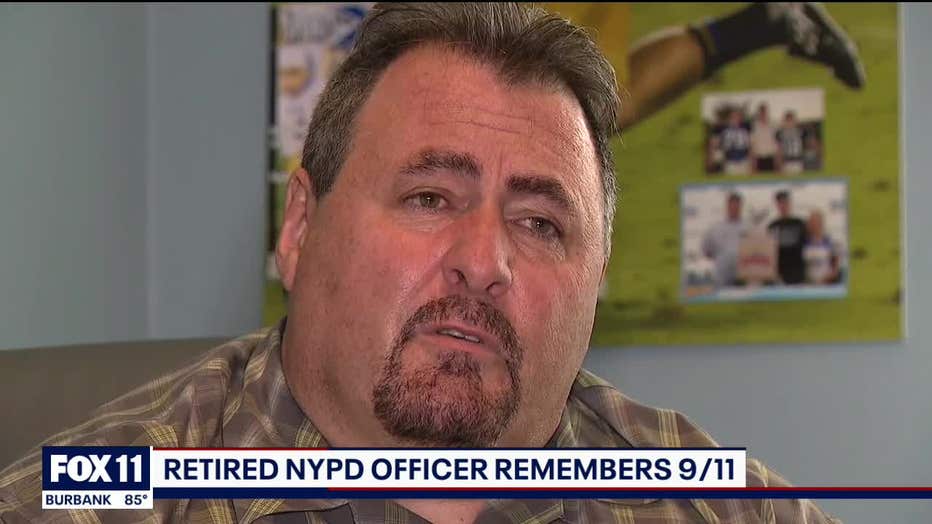 Reflecting on this 19th anniversary he says, “You’re just still hit with this pain and depression by know that so many people had passed away then and they’re not here with you now.”

His annual remembrance starts at the door of his Castaic home. “A police officer can’t do his job without his boots," he says. “On 9/11 each year’s anniversary I always leave my boots outside the door in respect of my fallen officers that passed away.”

One of those police officers was John Perry. On 9-11-2001 he was retiring. Perry was going to call it a career. Then the buildings got hit by airplanes turned into missiles.  He grabbed his police shirt. He went to work. Says Manfro, "... he was was doing his part trying to rescue some of them when, of course, the building crumbled and he got struck by the debris that crumbled above him.” His death pains Manfro to this day.

“You’re just still hit with this pain and depression by know that so many people had passed away then and they’re not here with you now,” Manfro said.