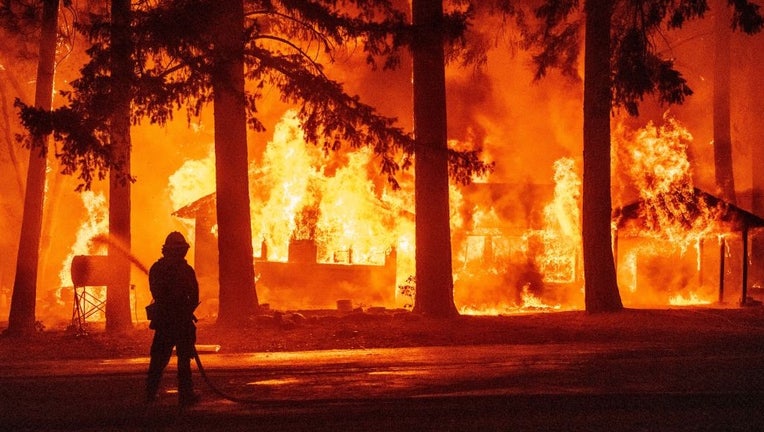 TOPSHOT - A firefighter sprays water on a propane tank as a home burns due to the Dixie fire in the Indian Falls neighborhood of unincorporated Plumas County, California on July 24, 2021. - The Dixie fire, which started only a few miles from the orig

SAN FRANCISCO - The president of California’s utility regulator warned a top power company Monday that power outages to prevent equipment from sparking wildfires should only be used as a last resort.

"We need specifics on where you have improved, where you are lagging and where you are focusing your resources," California Public Utilities Commission President Marybel Batjer told representatives of San Diego Gas & Electric. "Utilities will be judged by outcome, not by plans."

SDG&E was the first of the state’s three major utilities to testify during the planned three-day hearing; Southern California Edison and Pacific Gas & Electric, the state’s largest utility, are scheduled to brief PUC commissioners on Tuesday.

All three companies were criticized for their chaotic and unprepared handling of shutoffs in October 2019. Regulators have blasted PG&E for a botched shutoff that left nearly 2 million people in the San Francisco Bay Area and Northern California without power. People couldn’t get information as websites and call centers crashed and local officials didn’t know what to tell panicked customers.

Shutoffs have generally gone more smoothly since then, but Batjer on Monday impressed upon utility officials that planned outages were to be used as an absolute last resort given the potentially deadly consequences for medically vulnerable people who rely on power to live.

During a public safety power shutoff, a utility de-energizes its grid in order to prevent its equipment from failing and sparking a wildfire, often amid hot, dry and windy weather. Power lines have been blamed for about half of the most destructive wildfires in state history, according to the PUC, including 2018′s Camp Fire in Butte County that killed 85.

The risk of wildfire is expected to worsen as climate change has made California much drier and more flammable. PG&E has reported to regulators that its equipment may have sparked the state’s largest wildfire to date this year.

On Monday, the Dixie Fire in Northern California was burning near the town of Paradise, which was largely destroyed when failing PG&E equipment sparked the Camp Fire. The utility pleaded guilty last year to 84 felony counts of involuntary manslaughter with prosecutors unable to pin the remaining death on the utility.

San Diego Gas & Electric officials said Monday that they have fine-tuned weather forecasting, cleared flammable vegetation and created microgrids that can power town centers even with the electricity turned off. They’ve provided backup power to eligible customers and are better at targeting customers who will be affected, they said.

The utility powered down five times last year, with the largest planned outage affecting 74,000 customer accounts, said John Jenkins, vice president of electric system operations. He said the utility notified around 96,000 customers but missed alerting 2,000 customers who had their power turned off.