On Monday, House Democrats formally introduced an article of impeachment against the president for inciting last week’s violent insurrection at the Capitol. Many Bay Area representatives want to vote on impeaching the president as soon as possible.

WASHINGTON - Vice President Mike Pence is ruling out invoking the 25th Amendment to remove President Donald Trump from power, less than a week after the president fomented the violent insurrection at the Capitol.

In a letter late Tuesday to House Speaker Nancy Pelosi, Pence said the mechanism should not be used "as a means of punishment or usurpation" and reserved for cases of medical or mental incapacitation. Pelosi has called on Pence to secure the majority of the Cabinet and vote to declare Trump unfit to serve. 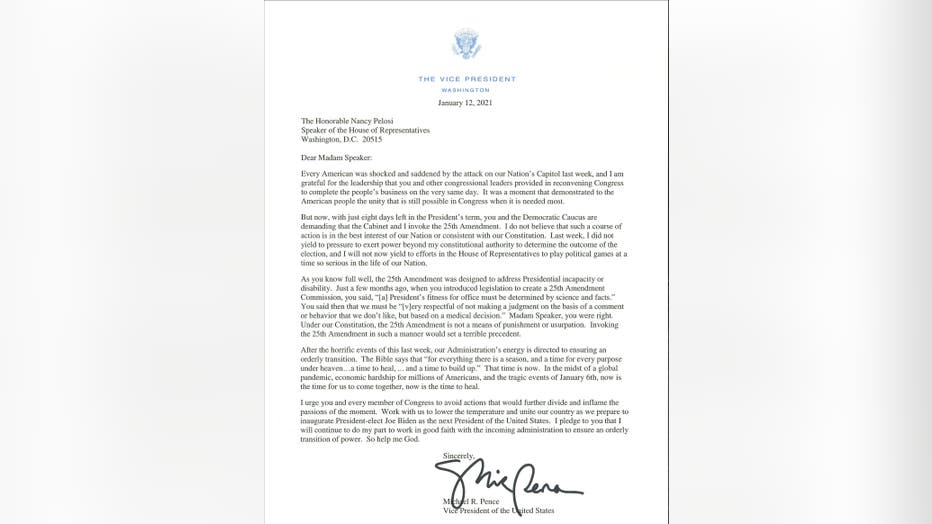 As the House appears on the cusp of a bipartisan impeachment of Trump, Pence encouraged Congress to avoid actions to "further divide and inflame the passions of the moment" and to focus on smoothing the transition to President-elect Joe Biden’s administration.

Pelosi has said if Pence rejects use of the 25th Amendment, the House will move to impeach him. Already, at least three Republicans have said they would vote for that.