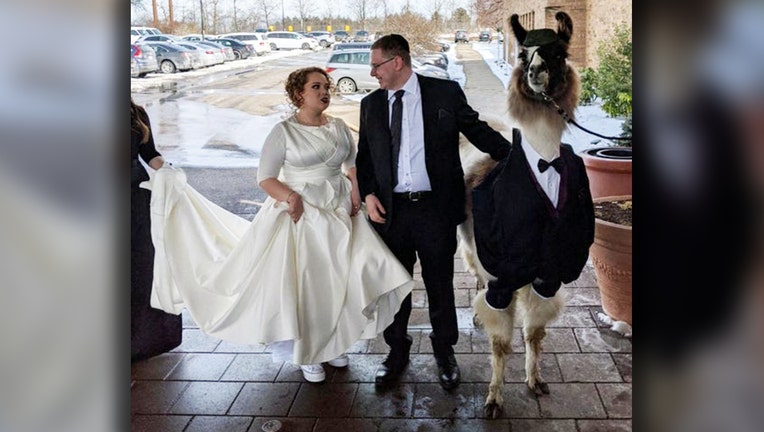 CLEVELAND, Ohio - A silly 2015 exchange between two siblings led to an event that has since gone viral: a wedding in which the unamused bride was forced to welcome a very dapper llama as a guest.

Five years ago, Mendl Weinstock was driving with his sister, Riva, to Indiana from their home in Ohio. During the drive, Riva was allegedly discussing her wedding “like it was tomorrow,” Mendl wrote in a post on Reddit, “even though she wasn’t dating anyone.”

The discussion eventually led Mendl to issue an ultimatum: “If you make me come to this wedding, I’m bringing a llama." According to Mendl, Riva “got very upset” at the idea, before eventually becoming so exasperated at the back-and-forth that she acquiesced and told Mendl he could bring a llama to her wedding — which, again, she had not yet planned, to a man she had not yet met.

Fast forward to October 2019, and Riva was happily engaged, planning her March 2020 nuptials.

However, Mendl had been planning for the big day as well.

“Literally, I called him to tell him I was engaged and his response was, ‘Great, I’m calling the llama farm now,’” Riva said, Unilad reported. “Probably not even an hour later, I got a text that said his llama rental was confirmed.”

As the wedding day was approaching, Mendl contacted his friend for help on how to make a suit jacket and shirt for the llama to wear. The friend, in turn, turned to Reddit for the answer.

“I've been hired to make a tuxedo for a llama and I don't have it's [sic] measurements. I'm also assuming the llama is male,” the original post read.

Fortunately — or perhaps, unfortunately, if you ask the bride — Mendl's friend was able to make the llama’s suit jacket. After it was all said and done, the cost of the llama rental and custom-made outfit totaled $450, Mendl confirmed on Reddit. But for him, it was all worth it for the one photo his sister agreed to take — a photo that eventually went viral on Reddit, with over 157,000 upvotes.

Riva said once she took the picture, she went back inside and was not having “any more of it.” The llama, Shocky, was not allowed inside the venue.

Despite Riva's exasperated face in the one photo she posed for — and her own admission that she wasn't “thrilled” by the llamas’ presence — she later said her expression was an accurate representation of “pretty much my face constantly when I look at my brother.”

The bride’s face aside, Mendl said the wedding guests, including Shocky, all had a great time at the wedding taking pictures.