Terminal 1 at Oakland Airport was evacuated Tuesday morning after a man armed himself with a knife and began threatening to harm himself, authorities said.

OAKLAND, Calif. - Terminal 1 at the Oakland International Airport was closed for nearly four hours Tuesday morning after a suicidal man with a knife threatened to harm himself, authorities said.

But deputies were able to de-escalate the situation by altering the temperature inside the airport and deploying Tasers - not guns - yielding a positive and non-deadly ending to a tense morning.

He was taken away in an ambulance just before 10 a.m., capping a tense encounter that began about 5:45 a.m.

Sheriff spokeswoman Tya Modeste said that deputies were able to distract the man by changing the temperature in the airport.

They turned off the air conditioning and the man got hot. He ended up shedding some of his clothing and got distracted by being uncomfortable, she said.

At that point, deputies deployed their Tasers and they went in to take his knife.

One deputy was able to wrest the knife free by wrestling him. The man, who was not identified, suffered a very slight injury to his neck, Modeste said.

When he was taken by ambulance, he was sitting up and talking.

Modeste said that no passengers or airport staff suffered any injuries.

The safe ending to the saga capped a situation where early in the morning the man, in his 30s, had passed a note to a TSA employee that said "Help me." 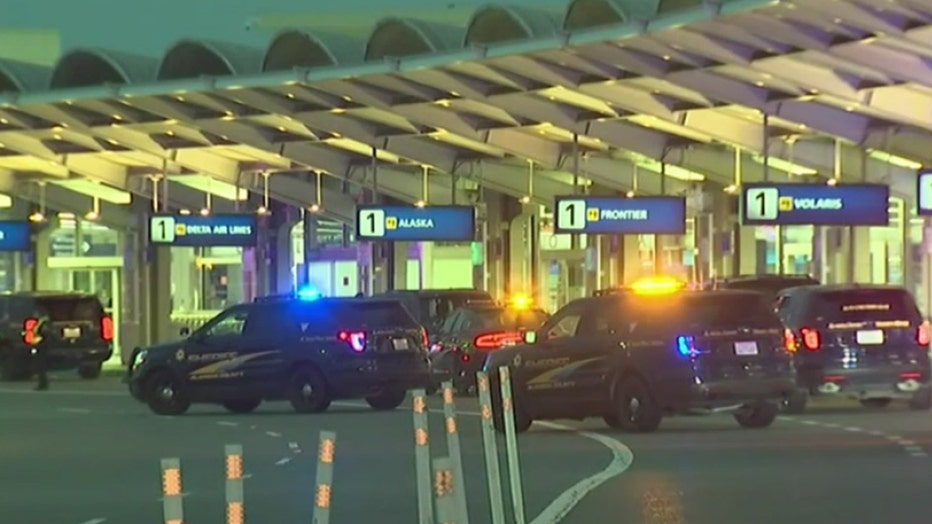 He then pulled out a large knife and held it to his throat, she said.

He appeared to be in a severe mental health crisis, she said, and she described him as "highly agitated."

It was not clear if the man will be arrested or charged, or whether he will simply receive mental health care.

Terminal 1 was evacuated beyond the checkpoint but Terminal 2 ran as usual.

Vice President Kamala Harris arrived at the Oakland airport on Monday to discuss jobs and clean drinking water. She departed on Monday afternoon.