The statewide retally was completed Wednesday night, with the results expected to be released Thursday.

ATLANTA - The statewide retally has been completed in Georgia, with the results of the election audit expected to be released on Thursday.

The total number of uncounted ballots found in the audit of Georgia's 2020 presidential election had increased to nearly 6,000 after two more counties say they've found discrepancies.

Tuesday, an additional 284 ballots were found in Walton County, officials say. Board of Elections chair Lori Wood told the Walton Tribune the problem was due to a precinct not uploading votes from one of its two ballot scanners.

On Wednesday, Georgia election official Gabriel Sterling announced that another memory card had been found with 293 ballots on it in Douglas County.

The adjusted results from two counties came less than a day after the Secretary of State's Office announced there were 2,755 uncounted votes on a memory card in Fayette County. 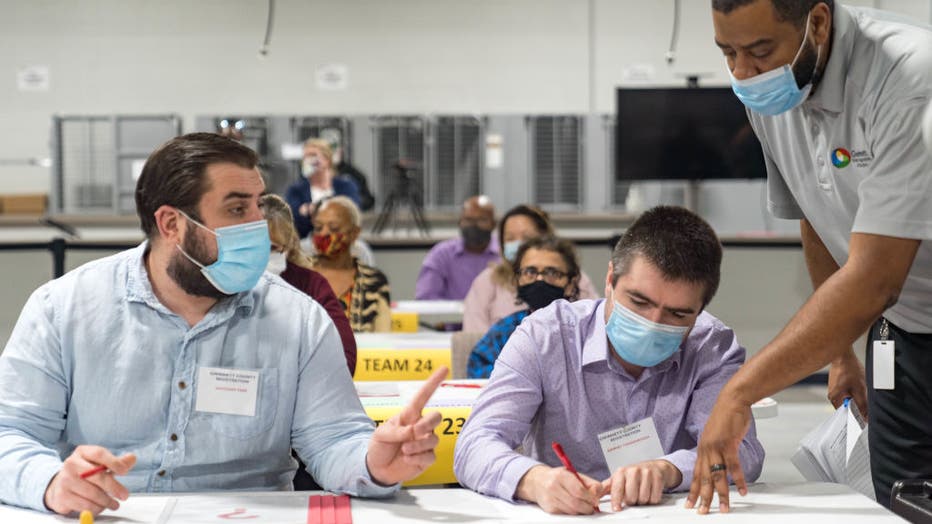 Gwinnett county workers begin their recount of the ballots in Lawrenceville.

"There was an issue where we noticed there were more people on the absentee ballot filed for voting in-person in Fayette County than was in the actual reporting," Sterling said. "It was discovered today for certain. Because of the audit, we found this. There were several places where the county should have seen this. "There were several human beings that didn't follow procedure."

A separate issue happened in Floyd County where 2,600 ballots were left uncounted prior to the county's initial certification. The error was discovered on Sunday during the third day of the state’s audit.

"We did have an issue with a scanner at the polling location where the undercount occurred. That will be the starting point for our investigation. As of now, we believe it was a technical issue caused by human error," Melanie Conrad with the Floyd County Board of Elections wrote in a statement released to FOX 5 News.

With the uncounted votes, the margin between President Donald Trump and President-elect Joe Biden in Georgia shifts to 12,781 in favor of Biden.

Despite the errors, Sterling said the process for the count and audit of the presidential election was working smoothly considering they are using a new system in a "high-stress situation."

"Let's keep it in perspective. There're 159 counties and we've found four that had this issues, and it would show up in this hand audit," he said.

Sterling also addressed a statement from Georgia Republican Party Chairman David Shafer about an error during the hand-count audit that would have shown Biden with slightly more than 9,000 votes compared to the actual total, saying that the error was a "non-issue" and would have been discovered in the required quality control counties have to do after the hand count is done.

A handful of Georgia counties were still working to finalize ballot retallies, the Secretary of State's Office said Wednesday afternoon.

"What they found was the process going through the normal process," Sterling said. "This is why we don't give out interim audit results because it can be misleading to look at them because there can be human errors on them ... it would have been caught by the quality control measures."

As of Wednesday morning, the Secretary of State's Office said about 4.97 million out of 5 million votes cast had been hand-counted in the audit with over a third of Georgia's counties reporting minor or no discrepancies.

The Secretary of State's Office has set a deadline of midnight Wednesday for counties to submit their audit results. Once the results from the audit are certified, the losing campaign can request a recount, which will be done using scanners that read and tally the votes.

The deadline for the state to certify the results of the election is Nov. 20.