LOS ANGELES - Just days after LAUSD and the UTLA union reached an agreement on when to return to the classroom, some teachers with young children are now facing a new problem... go back to school to teach or take care of their kids.

A new petition is circulating online calling on LAUSD to allow teachers to work from home.

Maya Suzuki Daniels is a mom to 20-month-old Silas. She’s also an LAUSD high school teacher in San Pedro and she says she’s being forced to choose between her job and her son.

"When I had a son I made the choice that nothing and nobody was going to come first." said Daniels.

So she started an online petition asking the district to allow her and other teachers with young children to be allowed to continue working remotely for the rest of the school year.

"I think that a waiver that allows parents to just continue working through the year it’s still continues to meet the student needs and accommodations," Daniels stated.

So far, more than 1,500 supporters have signed the petition including more than 300 of her fellow teachers. But other parents are frustrated by it. 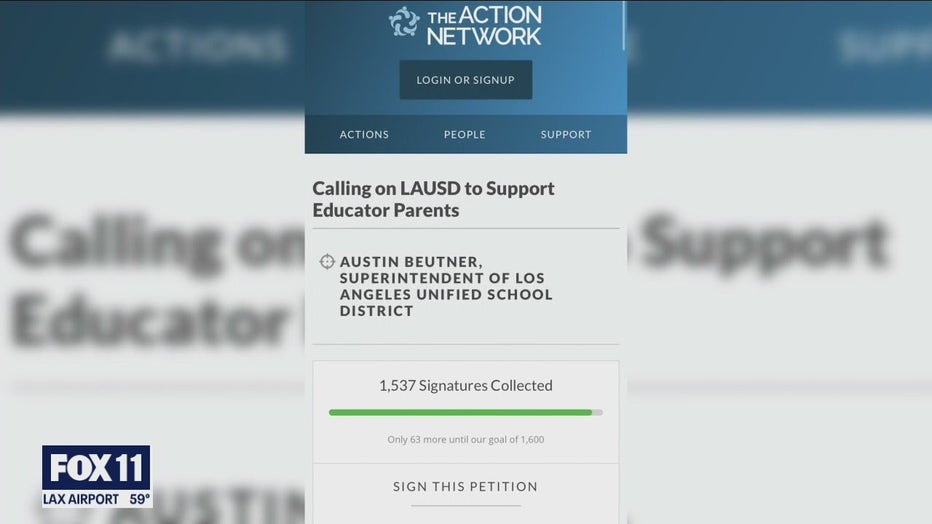 "It’s a delay tactic to help them figure out their next route or situation," said Hawthorne father of three Kevin Corbin. He says while’s he is sympathetic to Daniels’ cause, he says his family doesn’t have the same luxury. For the past year his 16-year-old daughter has had to help homeschool his kindergartner while Kevin and his wife work outside the home.

"Her grades suffered because we didn’t have a game plan. For you to be asking for this help I understand but at the end of the day. You had time to repair we didn’t," Corbin said.

A recent study by LAUSD shows half of parents weren’t planning to send their kids back to school.

"Right now we’re feeling like it might not be worth it for just six weeks," said LAUSD parent Kim Silverstein. She says she and her two kids were initially excited about going back, but upon learning about the hybrid model and the potential of their teacher staying at home on Zoom they are opting to stay remote.

"I think all of the complications and the red tape and the barriers to a positive learning environment I do think that more people are just going to opt to stay home and wait out the rest of the year," Silverstein said.

For its part, the district offers Beyond the Bell, before and after care for kids of LAUSD teachers.

But Daniels says that won’t help her and paying a nanny is out of the question on her teaching salary.

"Not only have multiple childcare facilities closed but they’re under a lot of regulations in terms of facilities and social distancing adequate staffing there’s a huge labor shortage in that industry."