Ireland Supreme Court: Subway's bread has too much sugar to qualify as bread

Bread served at Subway sandwich shops doesn't qualify as bread – at least, not in a way that would qualify it for an Irish tax exemption.

LOS ANGELES - A lab analysis commissioned by the New York Times found no identifiable tuna DNA in Subway’s tuna sandwich, according to the newspaper.

In its own statement, the fast-food giant fired back at the report and said it was not a "reliable way" to test processed tuna.

A Times reporter bought more than 60 inches of Subway tuna sandwiches from three different locations in Los Angeles. The reporter, who ordered the sandwiches without vegetables, cheese or dressing, packed the tuna meat into Ziploc bags and stuffed them in a styrofoam shipping cooler with ice packs to be tested, the report said.

The newspaper said it paid about $500 for the lab to conduct a PCR test in order to see if Subway’s tuna included one of five different tuna species. The food PCR test — which stands for polymerase chain reaction — quickly makes millions to billions of copies of a specific DNA sample, which scientists then amplify to a larger amount to study in detail.

After more than a month, the lab returned the results and said it found that "no amplifiable tuna DNA was present in the sample and so we obtained no amplification products from the DNA."

"Therefore, we cannot identify the species," the food testing lab, which did not want to be named, told the Times.

A lab spokesperson offered further analysis to the newspaper, saying there were two different conclusions from the test.

"One, it’s so heavily processed that whatever we could pull out, we couldn’t make an identification. Or we got some and there’s just nothing there that’s tuna," the lab spokesperson said.

Experts also told the Times that when tuna is cooked, its DNA becomes denatured, which means that the tuna’s characteristic properties can become destroyed and make it difficult or impossible to identify.

In a statement to FOX Television Stations about the Times report, the company echoed this sentiment about the nature of DNA testing.

"A recent New York Times report indicates that DNA testing is an unreliable methodology for identifying processed tuna. This report supports and reflects the position that Subway has taken in relation to a meritless lawsuit filed in California and with respect to DNA testing as a means to identify cooked proteins. DNA testing is simply not a reliable way to identify denatured proteins, like Subway’s tuna, which was cooked before it was tested," a Subway spokesperson said in part.

"Unfortunately, various media outlets have confused the inability of DNA testing to confirm a specific protein with a determination that the protein is not present. The testing that the New York Times report references does not show that there is not tuna in Subway’s tuna. All it says is that the testing could not confirm tuna, which is what one would expect from a DNA test of denatured proteins," the statement added.

It continued: "The fact is Subway restaurants serve 100% wild-caught, cooked tuna, which is mixed with mayonnaise and used in freshly made sandwiches, wraps and salads that are served to and enjoyed by our guests." 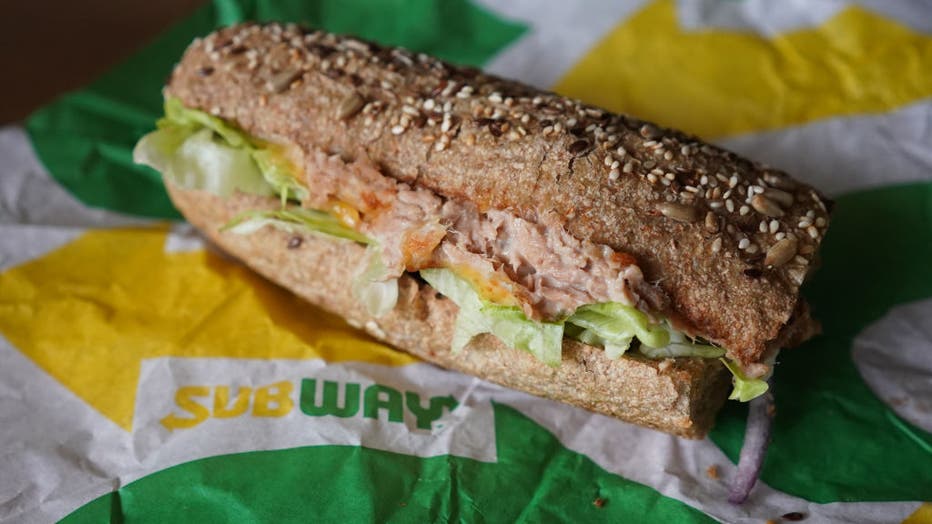 29 January 2021, Berlin: FILE - A Subway tuna sandwich is pictured on a table. (Photo by Jörg Carstensen/picture alliance via Getty Images)

The U.S. Food and Drug Administration has a Seafood List, made up of acceptable market names for seafood that can be sold. The Times noted that the FDA identifies 15 species of fish that can be labeled as "tuna."

On its website, Subway says the global chain only sells skipjack and yellowfin tuna, which the lab would have recognized as Katsuwonus pelamis and Thunnus albacares, according to the Times.

"Tuna is the only seafood sandwich that is on the Subway restaurants’ menu worldwide," Subway says under its "Tuna and Seafood Sourcing" statement. "We only sell skipjack and yellowfin tuna. It is sourced from fisheries with non-threatened stock levels. Furthermore, we have a global ban on the sale of tuna species that come from anything less than healthy stocks, for example Albacore and Tongol."

Subway announced that it has partnered up with Beyond Meat to test a meatless meatball sandwich.

The New York Times report comes as the fast-food franchise, which has more than 44,000 locations globally, faces a class-action lawsuit filed in January in California over its tuna sandwiches. The plaintiffs alleged in an amended complaint on June 7 that Subway misleads customers by labeling and advertising its tuna sandwich as "100% sustainably caught skipjack and/or yellowfin tuna."

The complaint accuses Subway of "selling and continuing to sell some mixture that is deceptively and dishonestly being passed off as in line with their representations to purchasers but are not actually compliant."

In February, Inside Edition commissioned its own Subway tuna sandwich test after purchasing three sandwiches from locations in New York. The outlet sent samples to a lab in Florida that specializes in DNA testing of fish, which found that the substance was "definitely" tuna.

In response to the amended lawsuit against Subway, a company spokesperson also said the new claims remain "untrue and have absolutely no merit."

"Subway would like to point out that, after being presented with information about Subway’s tuna and the reliability of DNA testing, the plaintiffs in the California lawsuit abandoned their original claim that Subway's tuna product does not contain tuna. However, rather than dismiss the claims altogether, as they should have, the plaintiffs’ lawyers filed an amended complaint that alleges our tuna product is now not 100% tuna and that it is not sustainably caught skipjack and yellowfin tuna. Just like the original claim, the new claims are untrue and have absolutely no merit," the Subway spokesperson said.

"In fact, the amended complaint does not remedy any of the fundamental flaws in the plaintiffs’ case that should result in the case being dismissed," the statement added.

Subway’s tuna sandwiches are also not the first product questioned by customers. In 2014, Subway made headlines for announcing the removal of the controversial chemical azodiacarbonamide, also found in yoga mats, from its bread products.