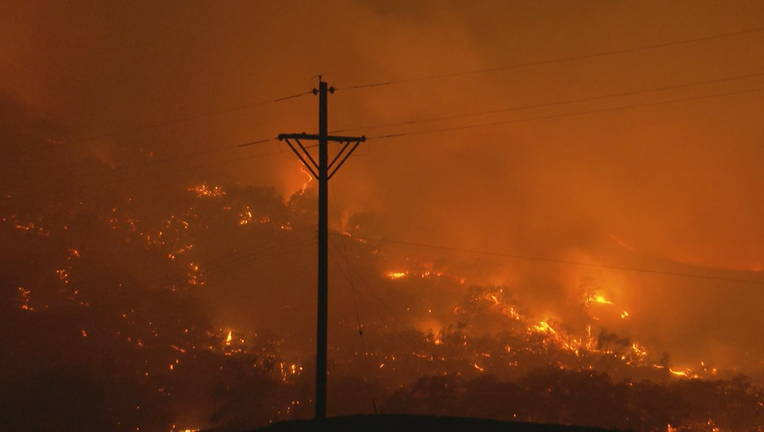 A city on fire behind a PG&E power pole. (Tim Walton)

SAN FRANCISCO -  A U.S. judge ripped into Pacific Gas & Electric on Wednesday, saying its executives have put greed before safety and telling the utility that has been blamed for huge California wildfires in recent years that it should plan to have at least 1,100 more tree trimmers to reduce the chances of causing even more devastation.

“I am going to do everything I can to protect this state from more death and destruction from this convicted felon," U.S. District Judge William Alsup said of PG&E.

He delivered his harsh rebuke of the nation's largest utility during a court hearing to review how well PG&E has complied with the terms of a five-year criminal probation imposed after its natural gas lines blew up a San Francisco Bay Area neighborhood and killed eight people in 2010. The utility was convicted of six felony counts of falsifying records and safety violations in 2016.

Alsup blasted PG&E for its abysmal track record since its probation began in January 2017. In that time, PG&E's aging power lines have been blamed for igniting a series of catastrophic wildfires that killed nearly 130 people and destroyed thousands of homes.

The aftermath saddled PG&E with more than $50 billion in potential liabilities, driving the San Francisco company into bankruptcy 13 months ago.

The judge told PG&E he believes the fires could have been prevented had it upgraded and maintained its electrical system instead of funneling billions of dollars into shareholder dividends and executive bonuses.

“PG&E neglected the maintenance, it's quite clear, even though they won't admit it," Alsup said.

PG&E lawyer Kevin Orsini assured the judge that the company has "fundamentally changed" since hiring a new CEO, Bill Johnson, and overhauling its board of directors last April.

Alsup said he plans to order PG&E to expand its tree-trimming force from roughly 5,400 contractors to 6,500 to help prevent branches, leaves and other vegetation from falling into its power lines and sparking more fires.

Alsup did not set a specific timeline for the utility to add tree trimmers, giving PG&E until March 2 to provide more information about its logistical challenges in doing so.

The judge's harsh words came a day after the head of the California Public Utilities Commission proposed a new enforcement process that could allow the regulatory agency to revoke PG&E's license if it failed to comply.