There will be two different elections in the district that includes Simi Valley, Santa Clarita, Palmdale and Lancaster. All the candidates are hoping to replace Katie Hill who resigned after a widely publicized scandal involved leaked nude photos and a relationship with a campaign aide.

All of the candidates are hoping to replace Katie Hill in the 25th district congressional seat.

Hill resigned after a widely publicized scandal involving leaked nude photos and a relationship with a campaign aide.

On March 3rd voters have to cast two votes in this district.

One is in the special election...voters pick one candidate to immediately serve in congress and finish Hill's expiring term.

The second vote...the regular primary election will determine who serves after January 2021.

"We have a fun time lining our campaign with for once in your life, vote twice,” said Democratic candidate Christy Smith.

Democratic Assemblywoman Christy Smith is the frontrunner in both races.

"In terms of the entire field, I am the most experienced administratively and legislatively and I’m ready to hit the ground running in day one," Smith stated. 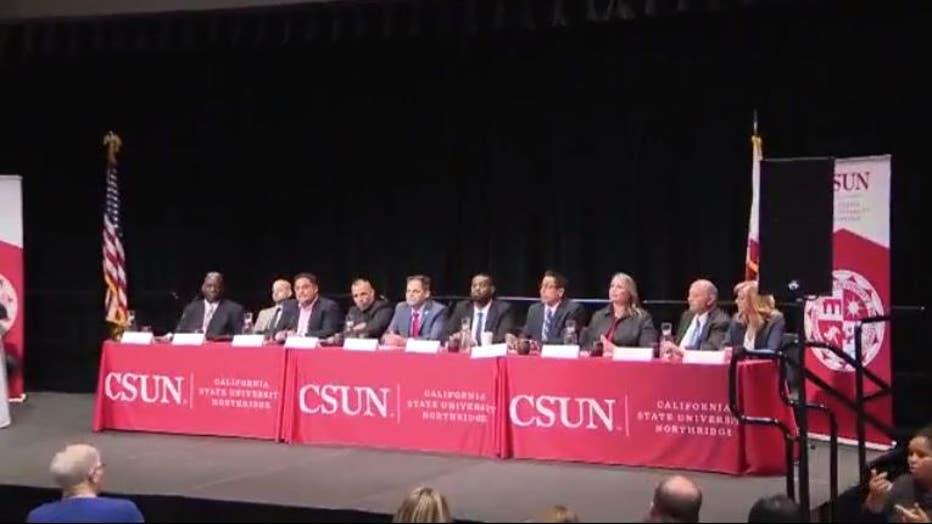 Even though Smith is backed by the Democratic Party… Governor Gavin Newsom, Speaker Nancy Pelosi  and Katie Hill herself, Smith says she’ll take a more centrist approach in congress.

"The reality is this district is still decidedly more centrist we have a slight Democratic registration edge, but I really work well with Republicans," she told FOX 11’s Elex Michaelson.

Cenk Uygur is promising something different.

Cenk is founder & host of The Young Turks, where he speaks to a massive progressive audience every day.

Cenk says he views politics differently than Smith does.

"We’ve got to get people universal healthcare, she does not agree with Medicare for All, I want to get money out of politics, she takes corporate PAC money. These are giant differences,” Uygur added.

Representatives from Smith’s office put out a statement in regards saying “Christy has pledged to not taking a dime of corporate lobbyist or PAC money in this race and throughout her congressional campaign."

Meanwhile, former Republican Congressman Steve Knight is hoping to get his old job back.

Knight chose not to attend this forum but republican Mike Garcia did.

He's a former navy fighter pilot who's been running since before Hill resigned.

"We’re at an inflection point in this nation’s history and we have an opportunity to double down on this nation’s successes and make it the best this country has ever seen,"  Garcia said.