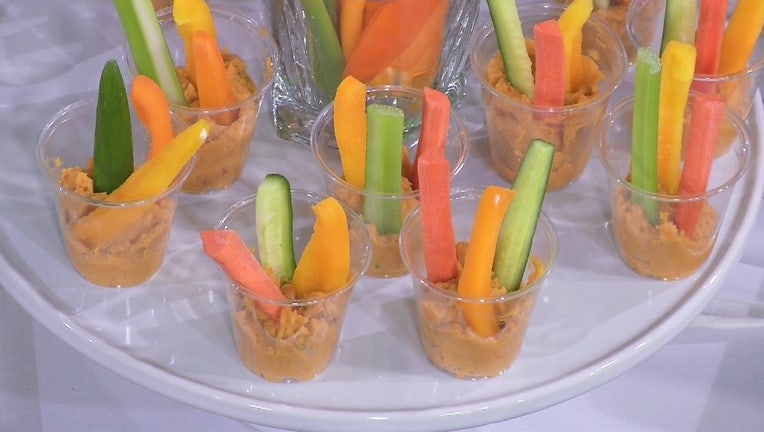 FILE: Hummus is served with an assortment of vegetables on a platter.

LOS ANGELES - An ingredient in hummus has been found to be good for Earth’s soil, a report said Wednesday.

Hummus is a thick, creamy paste or spread that is made with pureed chickpeas and sesame seeds, lemon juice, olive oil, garlic and spices.

Chickpeas, part of a subcategory of legumes called pulses, are what is good for soil, NPR reported.

Last year, U.S. farmers planted more chickpeas than ever before in order to satisfy growing demand for plant-based protein alternatives, the report said. This, in turn, could help restore soils depleted by decades of intensive farming.

These pulses, unlike corn or wheat, fix their own nitrogen from the atmosphere, which leaves extra stores of the nutrient in the soil for future crops to consume, according to NPR. Because of this, pulses could play a vital role in crop rotations, especially those that don't rely on chemical fertilizers.

Additionally, these crops could be part of a farming system that sequesters carbon from the atmosphere and helps mitigate climate change, the outlet reported.

Casey Bailey is a farmer in Fort Benton, Montana who grows organic chickpeas as the linchpin of a rotational planting program.

"I see this diversification and these legumes as a way to get away from the use of synthetic nitrogen," Bailey told NPR. "They're a tricky crop to grow, but I'm a huge proponent of trying to figure out how to do it."

"These (chickpeas) are helping restore the grasslands of the West, which are this huge carbon sink," he said.

Tim McGreevy is the CEO of the USA Dry Pea & Lentil Council and the American Pulse Association, which is a trade group that trumpets the power of chickpeas, lentils, dry peas and beans.

He started working with the organization in 1994, when the country was harvesting about 30,000 acres of chickpeas annually, but last year, that number had ballooned to 859,000 acres, NPR reported.