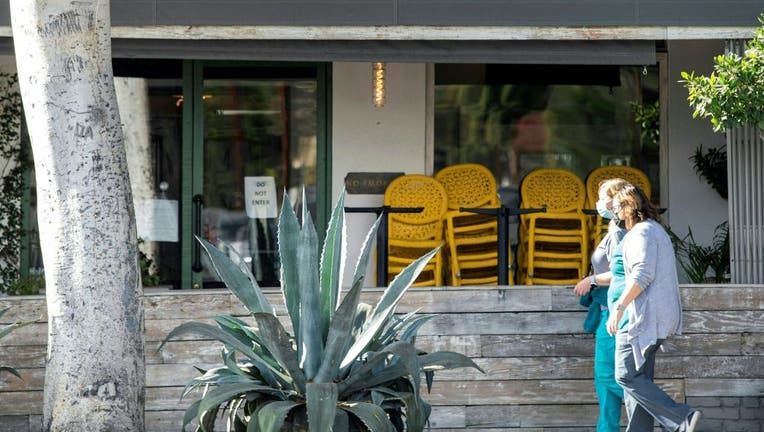 The order, which covers an 11-county Southern California area, took effect at 11:59 p.m. Dec. 6 and was set to expire Monday. But with the region's intensive-care unit capacity at hospitals still effectively listed at 0%, Gov. Gavin Newsom said the order is all but certain to be extended.

"It is clear and understandable that it's likely those stay-at-home orders will be extended," Newsom said.

A formal announcement had been expected Monday, but Newsom said the state was still compiling hospital and case data, and completing hospital- demand projections for the next four weeks.

"When we conceived of this framework, we are looking at projections four weeks out,'' he said. "We are looking at current case rates, positivity rates, looking at the community surveillance that we're doing and anticipating abased upon our modeling where that growth will be over a four-week period."

He noted, however, that based upon large number of people who appeared to have ignored warnings against travel over the Christmas holiday -- and those who will likely so do over the upcoming New Year's holiday, the state is bracing for a "surge on top of a surge, arguably on top of, again, another surge."

The official announcement is set to come Tuesday afternoon.

Statewide, hospitals are quickly running out of intensive care unit beds for coronavirus patients ahead of the presumed post-holiday surge.

The situation is already dire, and the worst is expected to come in the next few weeks after Christmas and New Year’s travelers return home. California hit 2 million confirmed coronavirus cases on Christmas Eve, becoming the first state to reach the grim milestone.

Parts of California likely to have lockdown orders extended

The stay-at-home orders for the San Joaquin Valley and Southern California are set to expire Monday — they were first imposed three weeks ago — but Gov. Gavin Newsom has signaled they would not be allowed to lapse. State officials said Sunday afternoon the orders were likely to be extended but did not make a definitive ruling.

Health inspectors and authorities stepped up enforcement at restaurants and shopping malls over the post-Christmas weekend in an attempt to curb the surge.

Statewide, officials on Sunday reported that California has had 2,122,806 confirmed cases and more than 24,000 deaths. The figures are from Saturday, the most recent data available. Most of the state is under stay-at-home orders.

The state’s total confirmed cases rose by more than 50,000 — an increase of 2.4% — over the previous day, data shows. Some of the cases reflect two days of data from Los Angeles County, which had an internet service interruption Friday and caused delays in reporting.

There were 237 additional deaths reported to the state, a figure believed to be an undercount because of LA County’s delayed reporting.

The stay-at-home orders require regions to have ICU capacity projections to be above or equal to 15%.

"It is likely that the Regional Stay at Home Order will extend for many regions in California," officials said in a news release Sunday.

In some counties in the San Joaquin Valley, state data shows there aren’t any ICU beds left. In others, only a handful remain. The crisis is straining the state’s medical system well beyond its normal capacity, prompting hospitals to treat patients in tents, offices and auditoriums.

In Los Angeles County, the nation’s most populous, county estimates show that about 1 in 95 people are contagious with the virus. Officials estimate one person dies every 10 minutes from COVID-19 in the county.