A police pursuit ended with deputies taking down a suspect on 5 Freeway along the Newhall Pass.

PALMDALE, Calif. - Two men were behind bars Friday after a dangerous pursuit on the 5 Freeway ended along the Newhall Pass in dramatic fashion.

Thursday night's pursuit began in Palmdale and ended in Sylmar when the driver ditched the car, tumbled down an embankment, and then ran onto the freeway and into oncoming traffic trying to escape deputies with the Los Angeles Sheriff's Department.

Deputies attempted to stop the driver for reckless driving when a chase ensued. The pursuit traveled southbound on the 14 Freeway before heading into the Antelope Valley area. The driver continued speeding with the vehicle's lights turned off as the driver and the passenger shot at deputies and at a police helicopter above, the sheriff's office said.

Two guns were found at the scene and deputies did not return fire during the pursuit.

While the driver attempted to flee the scene, a deputy-involved shooting occurred. The suspect was shot in the leg by a deputy and the bullet traveled to his other leg, which allowed deputies to take him down.

Sky FOX  captured the moments when it appeared the suspect was clipped by a passing vehicle and began limping on the freeway before traffic came to a screeching halt. 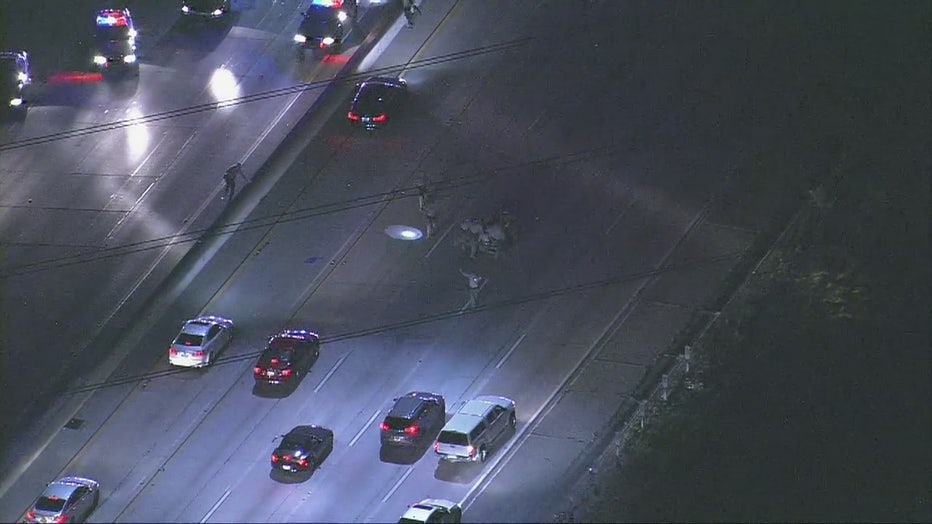 Both suspects have been arrested. The passenger involved in the pursuit was taken into custody at the scene and the driver was taken to a local hospital where he was treated and released before being jailed.

FOX 11 first picked up the pursuit as it traveled in the Palmdale area Thursday night. 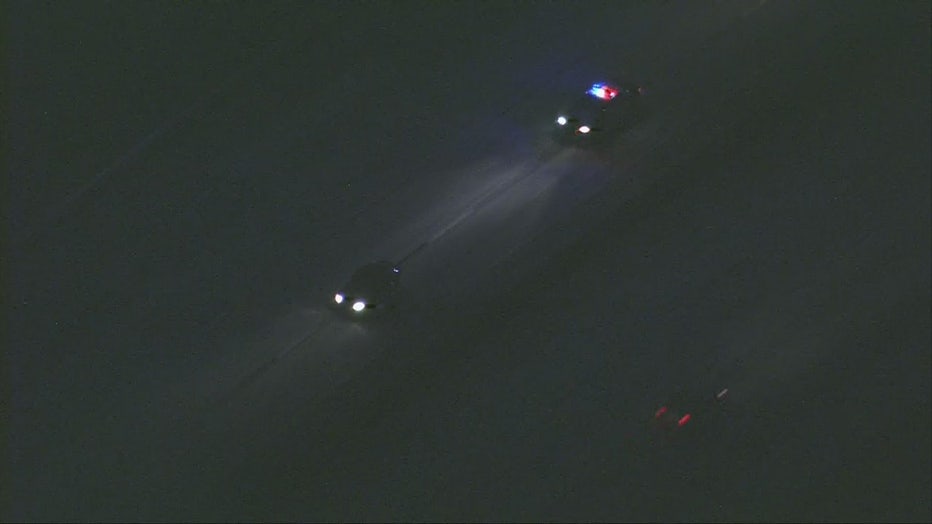 As the pursuit came to an end, at least one spike strip was successfully deployed. Smoke and sparks were seen shooting out from the rear of the vehicle where a tire was damaged following the spike strip deployment.

"This was an absolutely out of control chase," an L.A. County Sheriff's Department spokesman said. "We're just amazed that no one else got injured. These individuals put a lot of people in harm."

Authorities said the two suspects are from Northern California.

The vehicle involved in the chase was not stolen but did not belong to either of the suspects. Investigators continue to look for a connection between the suspects and the car's owner.

Also during the pursuit, sheriff's officials say the suspects were throwing things out of the car including a plastic bag with a powdery white substance that struck a deputy's windshield. The substance was taken to a lab as authorities work to conduct the investigation.