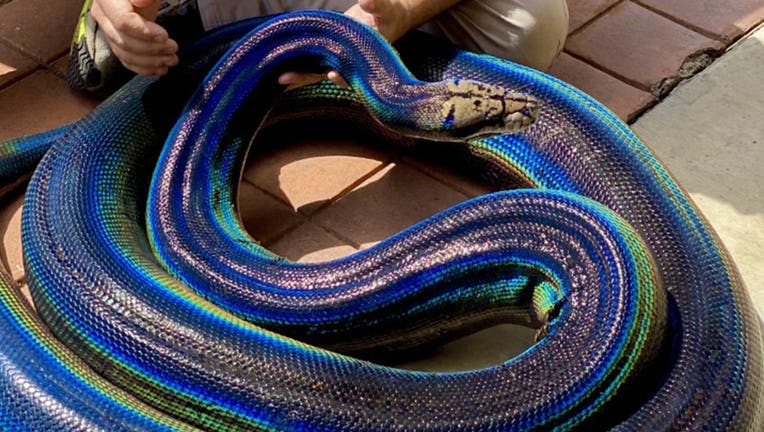 MyLove was recently featured on The Reptile Zoo’s Instagram page, where a video of her shiny scales was liked more than 31,735 times. (Courtesy of Jay Brewer)

This snake is truly mesmerizing.

A beautiful reticulated python at The Reptile Zoo, in Fountain Valley, California, has gone viral on social media for her beautiful scales that shine like a rainbow in the sunlight.

The snake, named MyLove, was recently featured on the zoo’s Instagram page last week in a video with a handler holding her in the sunlight.

The video was captioned: "MyLove’s iridescence just never gets old."

Justin Kobylka, a snake breeder in Georgia, sold a rare ball python for $6,000 after the reptile ended up with the shape of three smiley faces on its body.

Since it was posted last week, the video has been liked more than 31,735 times. Instagram users were quick to comment on the snake’s bright and colorful scales, with many calling her "beautiful" and "stunning."

Jay Brewer, the founder of The Reptile Zoo, told Fox News that MyLove was bred at the zoo and has the motley gene and the golden child gene, which is what makes her scales so colorful and bright in sunlight.

"She’s a super, super sweet snake," Brewer told Fox. "Her disposition is one of the best I’ve seen."

He added that this isn’t the first time MyLove has gone viral. Any time they post pictures of her on social media, the posts get plenty of attention.

"She’s probably one of the most famous snakes in the world," Brewer said. "She’s really, really made it big on the internet."