In a new video trailer for their highly anticipated Netflix docuseries "Harry & Meghan," the couple gives a behind-the-scenes look at their lives since they made the shocking decision to step back from their royal duties. The release of the trailer coincides with Prince William and Kate Middleton's trip to the U.S. The Prince and Princess of Wales touched down in Boston yesterday for a three-day trip supporting William's Earthshot Prize initiative.

LONDON - Prince Harry and his wife, Meghan, stick to a familiar script in a new Netflix series that chronicles the couple’s estrangement from the royal family, chastising Britain’s media and the societal racism they believe has fueled coverage of their relationship.

The first three episodes of "Harry and Meghan," released Thursday, dissect the symbiotic relationship between tabloid newspapers a nd the royal family and examine the history of racism across the British Empire, and how it persists.

The storytelling relies on interviews with the couple, their friends, and experts on race and the media. The series does not include dissenting voices, and there is no response from any of the media organizations mentioned.

"In this family sometimes, you know, you’re part of the problem rather than part of the solution,’’ Harry says in one of the episodes. "There is a huge level of unconscious bias. The thing with unconscious bias is that it is actually no one’s fault. But once it has been pointed out, or identified within yourself, you then need to make it right." 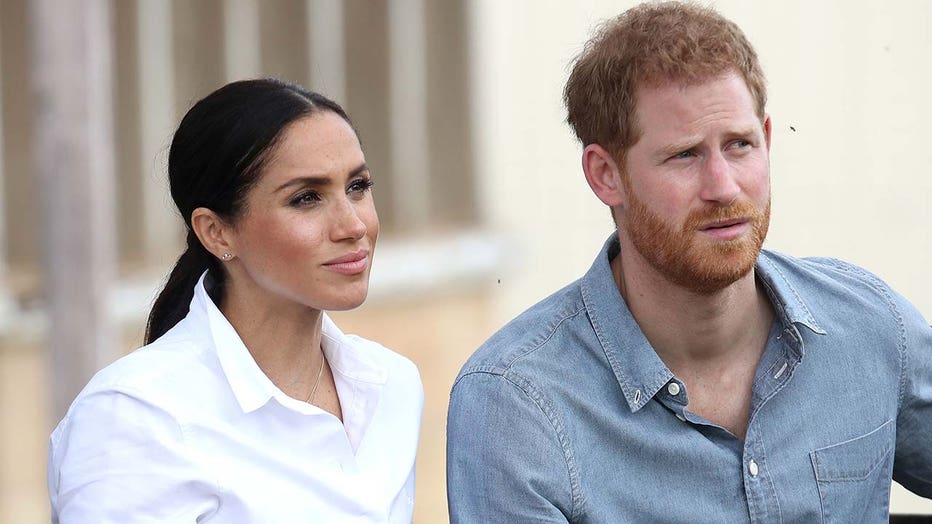 The media’s treatment of Meghan — and what the couple felt was a lack of sympathy from royal institutions about the coverage — were at the heart of their complaints when they walked away from royal life almost three years ago and moved to Southern California. Lucrative contracts with Netflix and Spotify have helped bankroll their new life in the wealthy enclave of Montecito.

Promoted with two dramatically edited trailers that hinted at a "war against Meghan," the Netflix show is the couple’s lat est effort to tell their stor y after a series of interviews with U.S. media organizations, most notably a two-hour sit down in 2021 with Oprah Winfrey.

The first three episodes break little new ground on royal intrigue, leading one British-based analyst to conclude that the main audience Harry and Meghan are trying to reach is in the United States.

The series is an effort by Harry and Meghan to cement their place in American society, where fame and riches await, says David Haigh, chief executive of Brand Finance, which has analyzed the monarchy’s value to the UK economy.

RELATED: Prince Harry, Meghan's harsh comments and bombshell claims about the royal family: Do they have royal regrets?

"They are trying to become the next Kardashian family. And they are using the fame and notoriety of the monarchy as their stepping stone to get there," he said. "No one would take the remotest bit of interest in either of them if they weren’t strongly associated with the UK monarchy."

The series comes at a crucial moment for the monarchy. King Charles III is trying to show that the institution still has a role to play after the death of Queen Elizabeth II, whose personal popularity dampened criticism of the crown during her 70-year reign. Charles is making the case that the House of Windsor can help unite an increasingly diverse nation by using the early days of his reign to meet with many of the ethnic groups and faiths that make up modern Britain.

Harry’s 2018 marriage to the former Meghan Markle, a biracial American actress, was once seen as a public relations coup for the royal family, boosting the monarchy’s effort to move into the 21st century by making it more representative of a multicultural nation. But the fairy tale, which began with a star-studded ceremony at Windsor Castle, soon soured amid British media reports that Meghan was self-centered and bullied her staff.

The new series seeks to rebut that narrative in the three hour-long episodes released Thursday. Three more are due on Dec. 15.

It opens with video diaries recorded by Meghan and Harry — apparently on their phones — in March 2020, amid the couple’s acrimonious split from the royal family.

It’s "my duty to uncover the exploitation and bribery" that happens in British media, Harry says in one entry.

The couple then tell the story of their courtship and the initial enthusiasm that greeted the relationship. But the tone shifts as Harry recounts the intense media scrutiny faced by Meghan, reminding him of the way his mother, Princess Diana, was treated before she died in a car crash while being trailed by photographers.

"To see another woman in my life who I loved go through this feeding frenzy – that’s hard," Harry says.

"It is basically the hunter versus the prey."

Harry and the series' other narrators say the palace is partly to blame for this treatment because it has granted privileged access to six newspapers that feel they are entitled to learn intimate details about members of the royal family since British taxpayers fund their lives.

Harry and Meghan said they initially tried to follow palace advice to remain silent about the press coverage as other members of the royal family said it was a rite of passage. But the couple said they felt compelled to tell their story because there was something different about the way Meghan was treated.

"The difference here is the race element," Harry said.

That bias has deep roots in the history of the British empire, which was enriched by the enslavement of Black people and the extraction of wealth from colonies in Africa, Asia and the Caribbean, said historian and author David Olusoga in the program. It is only since World War II that large numbers of Black and Asian people moved to Britain, changing the face of the nation.

Those changes aren’t reflected in the British media. While Black people make up about 3.5% of Britain’s population, they account for just 0.2% of the journalists, Olusoga said.

"We have to recognize that this is a white industry…," he said. "So people who come up with these headlines, they are doing so in a newsroom that’s almost entirely white, and they get to decide whether something has crossed the line of being racist."

King Charles III was asked if he had watched the series as he carried out an engagement on Thursday in London. He did not reply.

Race became a central issue for the monarchy following Harry and Meghan’s interview with Oprah Winfrey in March 2021. Meghan alleged that before their first child was born, a member of the royal family commented on how dark the baby’s skin might be.

Prince William, the heir to the throne and Harry’s older brother, defended the royal family after the interview, telling reporters, "We’re very much not a racist family."

B ut Buckingham Palace faced renewed allegations of racism only last week when a Black advocate fo r survivors of domestic abuse said a senior member of the royal household interrogated her about her origins during a reception at the palace. Coverage of the issue filled British media, overshadowing William and his wife Kate’s much-anticipated visit to Boston, which the palace had hoped would highlight their environmental credentials.