The final day of voting in the 2022 midterms unfolded Tuesday without major disruptions or widespread problems, a relatively trouble-free end to the first nationwide election since a campaign of conspiracy theories and false claims began eroding public confidence in the way ballots are cast and counted.

Scattered problems arose during the day that frustrated voters but did not appear to affect the ability to accurately tally the votes. In Arizona's Maricopa County, which includes Phoenix, some machine tabulators were unable to scan ballots immediately, a temporary glitch that began fueling conspiracy theories. Voter roll snags at check-in delayed some voters in Detroit.

"This was a pretty calm, normal election," said Sylvia Albert, director of voting and elections for the nonpartisan group Common Cause, which advocates for voting access. "We had isolated incidents of standard election administration issues, but nothing widespread or particularly concerning."

In the Houston area, where Republicans have targeted voting rules, equipment problems, shortages of supplies and poll workers were reported at several voting sites but were resolved quickly, said Harris County Elections Administrator Clifford Tatum. By afternoon, many sites around the county, which is the most populous in Texas, were reporting wait times of 14 minutes or less.

Since the 2020 election, former President Donald Trump and his allies have sown doubts about voting in the U.S. by blaming widespread voter fraud and tampering of voting systems for his loss to Democrat Joe Biden. There was no widespread fraud, and Biden's win was substantiated by multiple reviews, investigations and judges.

On Tuesday, Trump and other prominent Republicans continued their attacks on the integrity of elections by seizing on routine voting problems as a sign of something suspicious.

Yet the disruptions encountered by voters were fairly typical. Every election includes sporadic reports of clerical errors, long lines, equipment malfunctions and polling places that don't open on time. It's relatively common for some polling places to stay open late after problems arise, to make sure every eligible voter can cast a ballot. Voting was extended at four locations in North Carolina alone.

The hitch in Maricopa County, Arizona's largest, garnered outsized attention. A ballot-printing issue affected the ability of tabulators to scan ballots in slightly more than 25% of the county's polling places, prompting an outcry from Republicans in a state where elections for governor and U.S. Senate are expected to be close and where skepticism of election systems has run deep within the GOP since 2020.

More than 40,000 tweets about the machine failures spread in the span of two hours, according to the Stanford-affiliated Election Integrity Partnership, a group of some of the world’s top misinformation researchers.

"I am very sorry for any voter who has been frustrated or inconvenienced today in Maricopa County," said county Recorder Stephen Richer, a Republican. "Every legal vote will be tabulated. I promise."

Election officials said the issue was connected to ballot printers at these locations. While voting was not affected, officials said ballots that were unable to be scanned Tuesday at polling places will be taken to a central office to be counted on Wednesday. 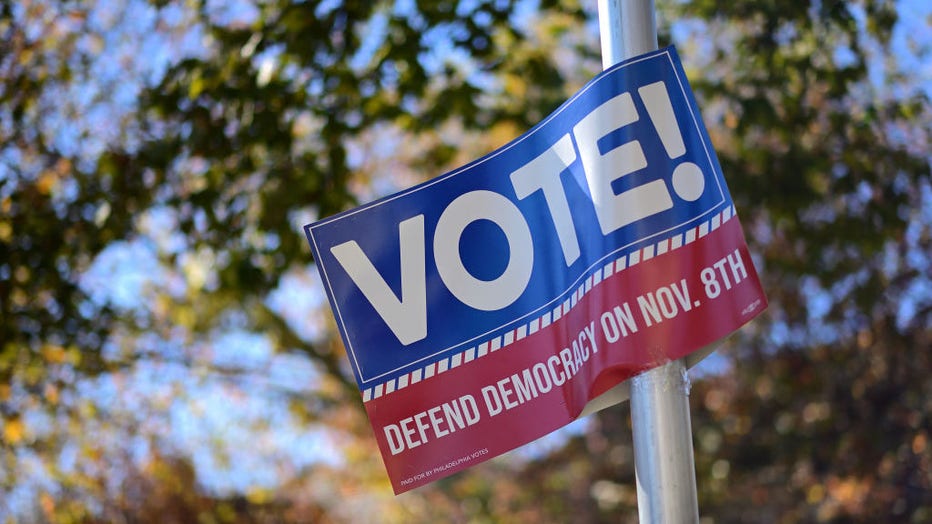 A sign that states "VOTE DEFEND DEMOCRACY on NOV. 8th" is affixed to a street pole the day before the midterm general election on Nov. 7, 2022, in Philadelphia, Pennsylvania. (Photo by Mark Makela/Getty Images)

The lead-up to Election Day this year was marked by concerns about further harassment and the potential for disruptions at polling places and at election offices where ballots will be tallied.

Instead of intimidation, there were mostly benign reports of partisans campaigning aggressively just outside polling places in some areas. In Nevada's Washoe County, election officials said two men threatened poll workers and were "aggressive" toward voters, including taking pictures of them, before being escorted out.

No other incidents were reported in the county, which includes Reno.

At a polling place in the Atlanta suburb of Woodstock, 25-year-old voter Tyler Moore said she won’t be surprised if there’s controversy after the election. "Everybody is on their toes about it," she said after casting her ballot at a church. "But the best thing we can do about it is just to vote."

College students waited in hourslong lines to register and vote in Michigan, which offers same-day registration. As of about 9 p.m., about 200 people still waited in East Lansing, along with about 500 people in Ann Arbor, state officials said.

Jessica Prozinski, who lives in Ann Arbor, brought blankets to hand out to the students after seeing a social media post.

"I don’t know if I am going to get my blankets back, but that doesn’t really matter," said Prozinski, 47.

In northeastern Pennsylvania's Luzerne County, about 44 polling places ran out of ballot paper. County Solicitor Mike Butera said no voters were turned away, more ballots were being delivered to every precinct and that polls would stay open an extra two hours.

Federal cybersecurity officials were monitoring reported attempts to crash state and local websites by flooding them with online traffic, a form of cyberattack known as "distributed denial of service." The website of the Mississippi secretary of state was down for part of Tuesday.

"We continue to see no activity that should cause anyone to question the security, the integrity or the resilience of the election," said an official with the U.S. Cybersecurity and Infrastructure Security Agency, speaking on condition of anonymity under agency rules.

False claims about widespread fraud and manipulation of voting machines have spread widely among Republicans, fueled by conspiracy theorists on social media and at events held across the country.

Election officials have defended the system. They note the many checks in place to ensure that machines accurately count ballots and that fraud attempts and cyberattacks are identified and stopped.

What sets the 2022 Midterm Elections apart

Most voters also cast hand-marked paper ballots or use machines that produce a paper record of their votes. These are used after the election to check that ballot-counting machines worked properly.

Before the pandemic, many states had begun to shift away from a single day of voting to offer days or weeks of early, in-person voting and ballots sent through the mail. No major problems were reported during the early voting period, when at least 47 million people across the country had already cast ballots.

But some of Pennsylvania's largest counties were scrambling to help voters fix mail-in ballots that had flaws such as incorrect dates or missing signatures on the envelopes used to send them in. That led to confusion and legal challenges in the battleground state where a few thousand ballots may be enough to sway outcomes of statewide races.

Mulvihill reported from Cherry Hill, New Jersey. AP reporters across the country contributed to this report.