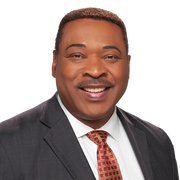 Tony McEwing co-anchors Good Day LA from 7 a.m. to 10 a.m. with Araksya Karapetyan. McEwing joined KTTV FOX 11 in 1993. In 2001 and 2003, McEwing was honored with an Emmy Award for his half-hour specials "Songs of Our Success."  He has earned seven Emmy Awards during his tenure at FOX 11. Before KTTV, McEwing spent 12 years working at KXTV, then the CBS affiliate in Sacramento, where he anchored the morning and noon newscasts. McEwing was also the Washington D.C. correspondent for WDSU, the NBC affiliate in New Orleans, Louisiana from 1980 to 1981. McEwing earned a Master’s degree in editorial broadcasting from the Medill School of Journalism at Northwestern University in 1981. He also received a Bachelor of Science in education in 1978 and attended the School of Law.