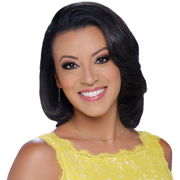 Liana Brackett joins the FOX 11 weather team from The Weather Channel in Atlanta, Georgia. She is ecstatic to be back home and forecasting the weather in her home state of California.

Born and raised in California, Liana was raised in Temecula, California, graduating from Temecula Valley High School (TVHS). Brackett began her weather journey at Arizona State University where she initially studied broadcast meteorology. Fascinated with weather forecasting, she decided to change her major and transfer to the University of California, Davis to study meteorology. She graduated with a Bachelor of Science in Atmospheric Science in 2009.

Not only can you find Liana on various shows on FOX 11, you can also find her as the weekend host of the show "Weather Today" by The Weather Channel on the app, Quibi. She now lives in Los Angeles with her hubby, David, and their pup, Dasher. In her free time and on social media, you might see Liana's little friend, Puppeta. Liana has been practicing ventriloquism since January 2020 so make sure you say "hi!" when you spot Puppeta.