NASA successfully launched Landsat 9, a satellite designed to track changes on our planet to inform on key areas such as climate change, on Monday, Sept. 27. (Credit: NASA via Storyful)

LOS ANGELES - The distant blue planet Uranus will reach its closest point to Earth Thursday — and may be visible to skygazers.

According to EarthSky, Uranus will reach a point in its orbit known as "opposition," meaning that it will be opposite the sun from the vantage point of Earth. 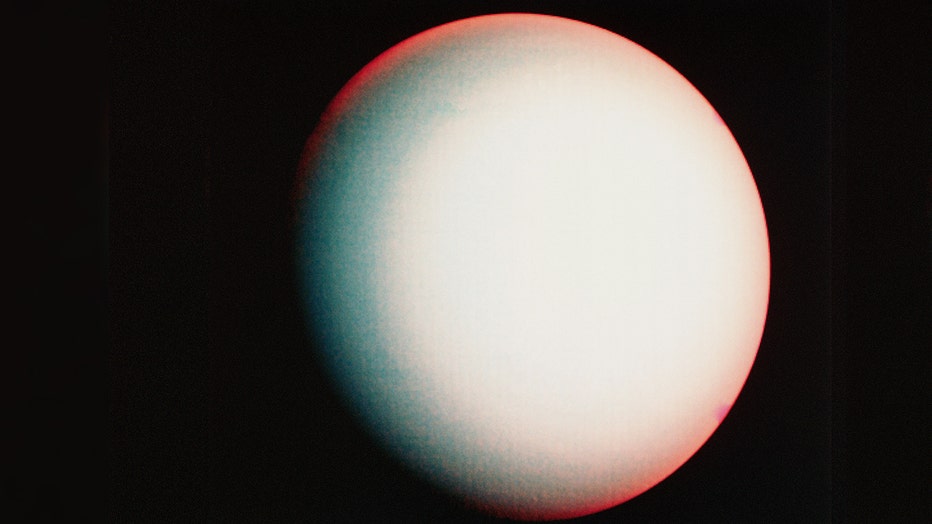 The seventh planet from the Sun will remain 2.8 billion kilometers from Earth as it comes to the point of opposition, which is more than twice as far as Saturn and between four and five times Jupiter’s distance.

When to watch the planet

Uranus will remain bright for weeks given its slow orbit, but will be at perigee — its closest to the Earth for this orbit — on Nov. 4 and 5.

Since Uranus stays out all night long, your best bet of seeing the planet will be in the evening hours on Nov. 4 and 5.

How to see Uranus

While it will be possible to see Uranus with the naked eye, the planet will be very faint.

Even at its brightest, Uranus will be barely perceptible as a dim speck of light.

In order to see the spectacular sphere with your own eyes, you’ll need to be in an area with optimal viewing conditions: clear, dark skies with no obstructions.

"Although Uranus is not considered a visible planet, at opposition it is bright enough to be visible for someone with excellent eyesight under very dark skies and ideal conditions," NASA said in a statement. "If you know where to look, it should be visible with binoculars or a backyard telescope.

This means your best bet of viewing the fascinating planet is with binoculars or a telescope.

Uranus will be visible just above the horizon in the eastern sky in front of the rather faint constellation Aries.

While it may be difficult to see the planet, there is good news.

According to the Farmer’s Almanac, viewers won't have to worry about the moon's light washing out fainter stars and planets because there's a new moon Thursday night.

Without a moon in the sky, there will be no bright moonlight to wash out fainter background stars and planets such as Uranus. Darker skies mean you have a better chance to spot dim objects.

You may also see a meteor or two

It just so happens the date of opposition is right around the peak of the South Taurid meteor shower.

While you’re out trying to find Uranus, you will also have the opportunity to catch a meteor or two.

According to EarthSky, the meteor show will peak in the late hours of Nov. 4 through dawn of Nov. 5, and the Taurids are well known for having a high percentage of fireballs — or exceptionally bright meteors.