Questions are being raised about the safety of Hawthorne Boulevard after Tiger Woods was involved in a horrific crash in Rolling Hills Estates.

LOS ANGELES - In the wake of the rollover crash that left Tiger Woods with severe leg injuries, county Supervisor Janice Hahn ordered a safety review of the stretch of road in Rancho Palos Verdes.

Hahn posted to social media Wednesday, "Anyone who has driven the stretch of Hawthorne Blvd where Tiger Woods crashed his car will tell you how easy it is to pick up speed on that hill."

In the wake of the rollover crash that left Tiger Woods with severe leg injuries, county Supervisor Janice Hahn ordered a safety review of the stretch of road in Rancho Palos Verdes. 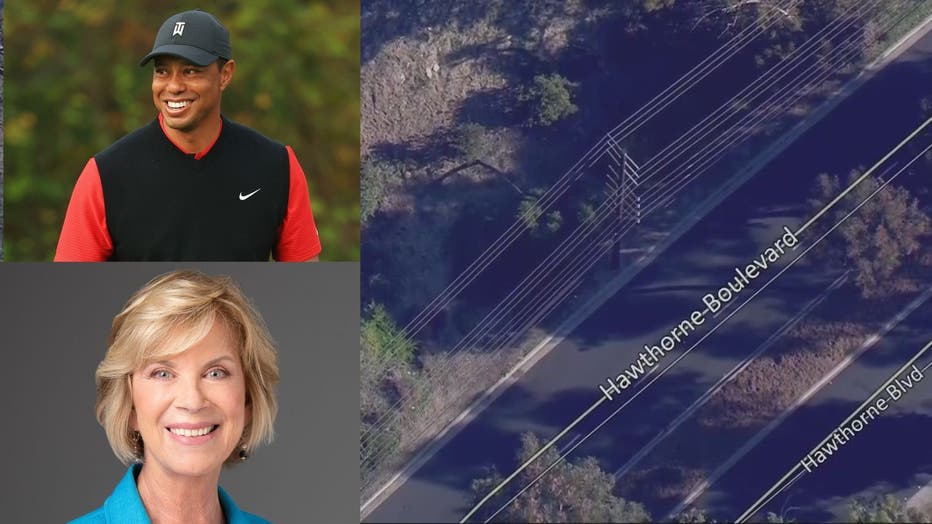 "Traffic safety across Los Angeles County is a tremendous concern for me and my colleagues on the Board of Supervisors," Hahn said in a statement. "The accident occurred along a stretch of roadway between two coastal communities: the cities of Rancho Palos Verdes and Rolling Hills Estates. But the issue of traffic safety is one that affects the entire L.A.County region."

Los Angeles County Sheriff Alex Villanueva told reporters Wednesday that since January 2020, there have been 13 accidents at the location on Hawthorne Boulevard near Blackhorse Road where Woods' crash occurred Tuesday, four of them resulting in injuries. He pointed to the downhill, curving nature of the northbound roadway.

"Even if you're not accelerating, just by gravity alone you're going to start going faster," Villanueva said. "In fact, there's a turnout for trucks and a warning about testing your brakes."

Villanueva: Tiger Woods was not impaired in crash

Golfer Tiger Woods was seriously hurt after he was involved in a single-car crash in Rolling Hills Estates Tuesday morning.

RELATED: What kind of car was Tiger Woods driving?

Hahn directed the county's Department of Public Works to "conduct a safety review of this section of roadway and to reach out to both cities with an offer of technical assistance and engineering support to make it safer for motorists, local community members and the general public."