A gang member who killed a man in East Los Angeles in 2017 then opened fire on two Whittier police officers, killing one and wounding the other, was convicted Wednesday of murder and other counts.

NORWALK, Calif. - A gang member convicted of opening fire on two Whittier police officers, killing one and wounding the other, along with killing a man in East Los Angeles earlier the same morning, was sentenced Wednesday to life in prison without the possibility of parole.

Michael Christopher Mejia, 30, was found guilty Sept. 1 of two counts of first-degree murder for the Feb. 20, 2017, killings of Keith Boyer, a 53- year-old Whittier police officer who was the first officer in the city killed in the line of duty in 37 years, and 47-year-old Roy Torres a few hours earlier. 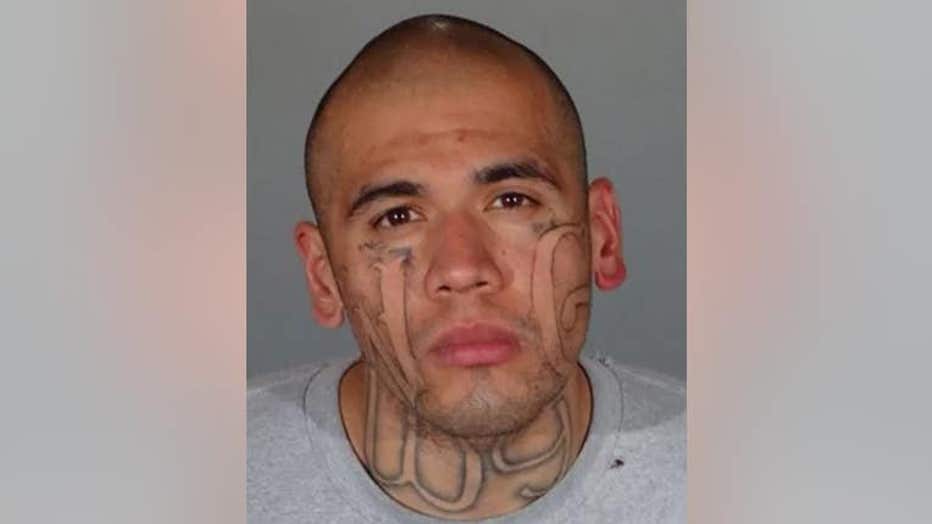 He was also convicted of an attempted murder charge involving Officer Patrick Hazell, who was shot in the abdomen, along with one count each of carjacking and possession of a firearm by a felon.

Jurors also found true the special circumstance allegations of murder of a peace officer in the performance of his duties, murder for the purpose of avoiding arrest and multiple murders, along with gang and gun allegations. 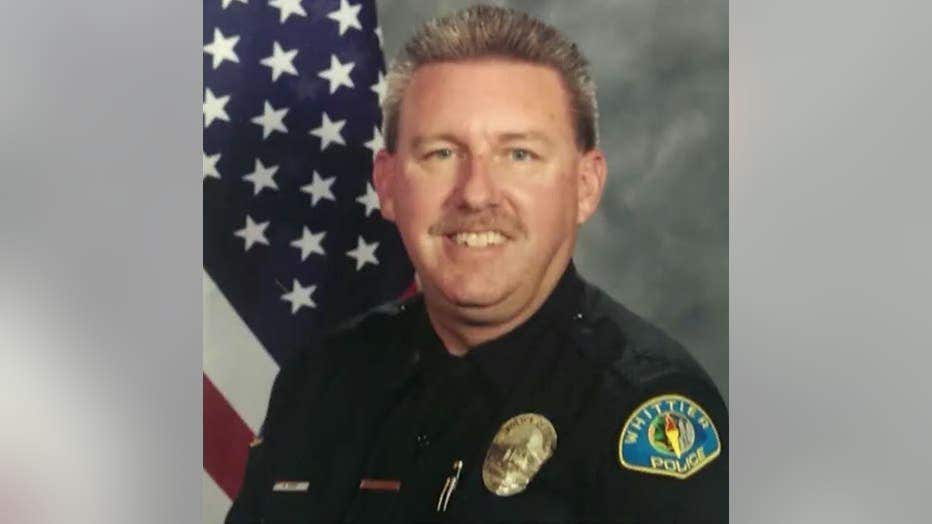 The judge noted that the two officers had pulled up to render aid following a traffic collision in which Mejia was involved shortly after killing Torres in front of two other people, and that Mejia has not "shown remorse" for his crimes.

"He is quite proud of it," the judge said of the defendant, who admitted just before sentencing that he had a 2010 conviction for robbery.

Whittier Police Chief Aviv Bar, who was in uniform at the courthouse for the sentencing, said, "The savage execution of Officer Keith Boyer" and the attempted murder of Hazell "has changed our department forever."

"He truly deserves the same sentence he inflicted on Officer Keith Boyer," the police chief said, telling the judge that Mejia "deserves no leniency."

Over the objection of the two prosecutors in the trial, the Los Angeles County District Attorney's Office dropped its bid to seek the death penalty against Mejia in February. The reversal came just over two months after District Attorney George Gascon was sworn into office.

Gascon -- who said he had a "mandate from the public" -- has vowed that the office will no longer pursue the death penalty.

Whittier's police chief opposed the decision and spoke out against it at a Feb. 18 hearing in which he asked for all of the applicable charges and penalties to remain in place.

"I think it's very unfortunate," Bar said outside court Wednesday of the death penalty being pulled as a potential punishment for Mejia. "I think if this happened in any other county around here, this would be a death penalty case."

The chief told reporters that his department is still reeling from the loss of Boyer, a 27-year veteran of the city's police force and the father of three grown children.

"It's extremely difficult every day for everybody that works here, especially for a large team of officers that were there, that tended to him as he died on the street that he protected for so many years," Bar said. "His picture is up, his locker is decorated, a memorial is there and it's on our mind every single day. It's on the mind of every single officer who goes on patrol, not just in our department, but anywhere in the county, that the dangers are out there."

One of the slain officer's sons, Josh, told the judge that his heart was "shattered to pieces" the day he was informed that his father had been murdered in the course of duty and that things "continued to get worse" when the District Attorney's Office opted against seeking the death penalty for his father's killer.

"Please do not let this man have any chance of parole," he implored the judge. "This is the kind of man that we don't want on the streets."

Boyer's stepfather and aunt had also objected earlier to the decision by the District Attorney's Office not to pursue the death penalty. Boyer's daughter, Ashley Sheleretis, called Mejia "a slave to evil and darkness," and told the defendant that he had made her father into a "legacy" and "caused a cop to be celebrated across the nation."

One of Torres' cousins, Tiffany Garcia, said it has been four years and nine months of "heartache, pain and many tears" and that she "never thought that I could hurt so bad."

"You are not his cousin," she said.

Mejia told authorities after his arrest that Torres was his cousin, but Torres' relatives have insisted that he was not related to Mejia.

Jurors heard an audio recording of Mejia telling investigators when asked if he had anything to say to the Whittier Police Department that they should "train your guys better" and that he didn't feel sorry.

During the 48-minute interview in a hospital jail ward eight days after the killings, Mejia initially told Los Angeles County sheriff's Detectives Dean Camarillo and Omar Miranda about the killings, "I don't remember doing none of that."

But he later told the detectives, "I guess you guys have everything down -- smoked my cousin, smoked the cop. ... I mean, what else do you guys want? I shot another cop ... He shot me," Mejia said during that interview.

In the interview first played in court at a June 2017 hearing in which he was ordered to stand trial, Mejia admitted being a gang member and drug user and told the detectives, "I did it, I mean, I did it ... both of 'em, all three of them had it coming," adding that the "officer got too aggressive with me."

When asked by homicide investigators what happened with Torres, the defendant said the victim -- whom he described as a "cool cousin" from his grandfather's side -- should have "kept his nose clean" and that he had "warned him."

In his closing argument, Deputy District Attorney Garrett Dameron urged jurors to hold Mejia "accountable for the ruthless, inhumane killer he is."

The prosecutor said the two police officers were responding to a three- vehicle traffic collision near Colima Road and Mar Vista Street in which Mejia had been involved, and that the two had no idea that those would be "the last moments" of Boyer's life.

Dameron called the evidence "so strong," telling jurors there was "clear intent to kill the victims in this case" and an "abundance of evidence" that Mejia premeditated the shootings.

The deputy district attorney told jurors that Mejia committed the crimes "to get attention" and wanted his face shown on the evening newscasts.

Mejia's attorney urged the panel to find his client guilty of the lesser crime of second-degree murder. Defense lawyer Paul Cohen argued there is "no indication that he (Mejia) planned these crimes ahead of time."

Cohen told jurors there shouldn't be any doubt that Mejia was using drugs in the days leading up to the crimes, saying that voluntary intoxication is "key to this case."

"It was all about drugs and getting high," Mejia's attorney said.

The defense attorney said his client "wasn't a career criminal" and disputed whether his client was even an active gang member at the time.

In his rebuttal argument, Deputy District Attorney Geoff Lewin said the "most damaging evidence" came from the defendant himself, whom he said "admits to everything essentially." Lewin said there was no evidence of a methamphetamine-induced psychosis in which Mejia didn't know what he was doing at the time of the crimes.

Mejia pulled a Glock 9 mm semiautomatic handgun from his waistband "without warning or provocation" and shot Hazell several times and then Boyer multiple times before Boyer could draw his firearm as the two officers approached the car after responding to the traffic collision. They had learned from a dispatcher that the Dodge Stratus had been reported stolen, according to a March 2018 report by the District Attorney's Office that determined police "were justified in using deadly force to take Mejia into custody and acted reasonably in shooting Mejia in that effort." Mejia was shot once in his left side.

Hazell -- whose gun was severely damaged when he was shot -- was able to fire once and another officer fired 14 shots at Mejia as the defendant tried to get into Boyer's patrol vehicle, according to the report.

That report noted that Mejia yelled, "You got me!" and threw his handgun onto the street, raised his hands and got down on one knee. Investigators subsequently determined that Mejia had fired all of the bullets that had been loaded into his handgun and that it was empty when he threw it to the ground, according to the report.