LOS ANGELES - California may have paid out nearly $10 billion in phony coronavirus unemployment claims — more than double the previous estimate — with some of that money going to organized crime in Russia, China and other countries, according to a security firm hired to investigate the fraud.

At least 10% of claims submitted to the state Employment Development Department before controls were installed in October may have been fraudulent, Blake Hall, founder and CEO of ID.me told the Los Angeles Times.

The Times on Friday said that would work out to $9.8 billion of the benefits paid from March through September.

The money went to people who lost their jobs when the state began locking down businesses in an effort to curb the COVID-19 pandemic that currently is overwhelming hospitals and causing hundreds of deaths a day. 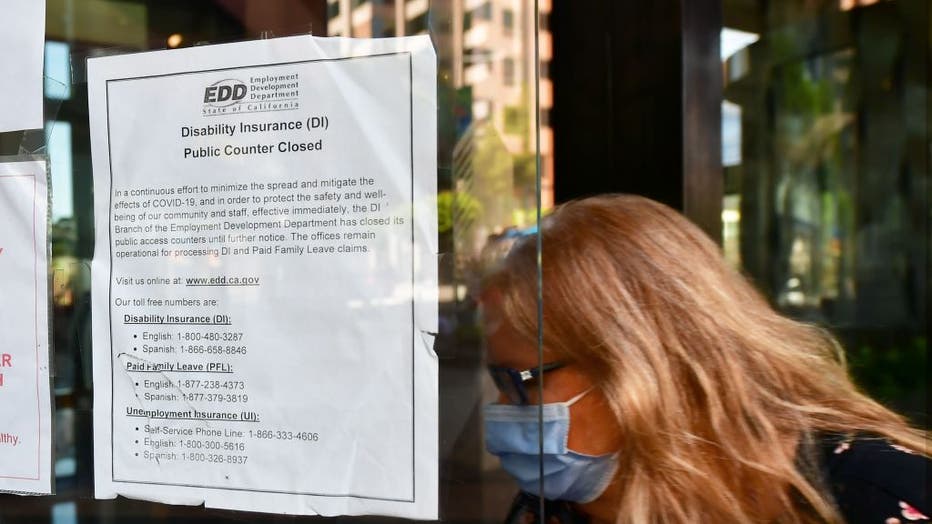 A woman wearing a facemask enters a building where the Employment Development Department has its offices in Los Angeles, California on May 4, 2020. (Photo by Frederic J. BROWN /AFP via Getty Images)

California, the nation’s most populous state, has processed more than 16 million unemployment benefits claims since March and paid out $113 billion. The Employment Development Department has struggled to keep up with the demand, facing intense pressure to work through a backlog that at one time numbered more than 1.6 million people.

The payout includes $43 billion from a federal expedited assistance program for independent contractors, gig workers and the self-employed that is less secure, the Times said.

The state has acknowledged that the department was bilked out of hundreds of millions of dollars in COVID-19 unemployment funds that went to fraudsters, including some in the name of U.S. Sen. Dianne Feinstein. Others were sent to inmates in jails and prisons, including some on California’s death row.

Hall’s company was hired by the Employment Development Department and since October his firm had blocked nearly 470,000 phony claims.

Much of the COVID-19 fraud in California and other states was perpetrated by criminals in some 20 countries, he said.

"When the Russians and the Nigerians and the Chinese are the players on the field, they are going to put up some points," Hall said. "This is a very sophisticated cyberattack that’s being run at scale."

The U.S. Department of Labor’s inspector general’s office warned in November that as much as $36 billion of the $360 billion in federal COVID-19 support payments could be improper or fraudulent.

Rita Saenz, who became the Employment Development Department’s new director this month, called it an unprecedented criminal assault on the benefits system.

Saenz told the Times that she couldn’t comment on the possibility of there being $9.8 billion in fraud because the department is still trying to determine how much fraud was committed.

"My intention is to do everything we can, working with our law enforcement partners, to catch whoever is doing it and bring them to justice," she said.

Last month, the Employment Development Department suspended payment on 1.4 million claims until they could be verified.

This story has been corrected to show that the Los Angeles Times reported that a 10% fraud rate for California unemployment benefits paid from March through September could total $9.8 billion, not $98.8 billion.